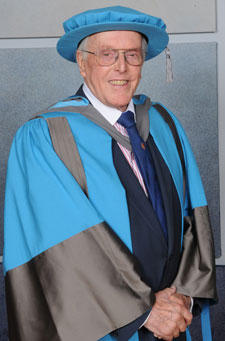 Actor and disability rights campaigner Lord Rix will demand better training for care home staff when the Government's response to the Winterbourne View abuse scandal is published later this month. Lord Rix made his comments after receiving an Honorary Doctorate of Letters at Kingston University in recognition of his services to theatre and disability rights.

With more than 30 years as an actor and manager in stage, television and film under his belt, Lord Rix retired in 1980 and devoted his energies to campaigning for people with learning difficulties. He married actress Elspet Gray in 1949 and became involved in disability rights after the first of their four children, Shelley - who passed away in 2005 - was born with Down's Syndrome.

Lord Rix, who is president of the Royal Mencap Society and co-chairman of the all-party Parliamentary committee on learning disability, said the most important issue at present was to ensure standards were massively improved following the revelations of abuse and neglect at Winterbourne View. Six staff were recently jailed for abusing patients with learning disabilities at the private hospital in Bristol. Lord Rix said he would use his position as an independent peer to raise his concerns when the Government publishes its report into the affair.

"Winterbourne View - I can actually do something about that in the House of Lords," he explained. "I'm hoping to stage a debate to discuss what has been going wrong and to look at what the government intends to do about it." The key was the quality of staff and ensuring they were properly selected and trained, he said. "There are exceptions, but a lot of these private homes are badly run and managed because they're in it just to make money," he added.

Lord Rix confirmed he would also like to see an end to the practice of local authorities sending adults with learning disabilities to live in large care homes far from their families. "Some people are moved miles from home and kept in assessment facilities that have turned into long-stay hospitals with as many as 50 or 60 patients - that's the kind of place that was supposed to be abolished in the 1980s," he said.

The peer, 88, who lives in Esher, Surrey, said he was thankful that his daughter had received excellent care, in part at Normansfield in Teddington - the former home of Victorian doctor John Langdon Down who gave his name to Down's Syndrome. The home is now known as the Langdon Down Centre and is a theatre, museum and national office of the Down's Syndrome Association. 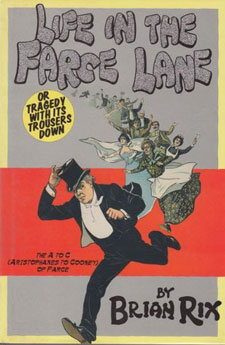 A professional actor from the age of 18, Lord Rix went on to form his own theatre company and presented and acted in productions, including farces such as Dry Rot, at the Whitehall and Garrick theatres in London. He performed in more than 70 BBC television shows, often appearing alongside his wife Elspet - who later played the first queen in television comedy Blackadder. Lord Rix also appeared in films including The Night We Dropped A Clanger in 1959 and The Night We Got The Bird in 1961.

He said he was lucky to have always been in work but acknowledged things were tougher for today's graduates. "A degree is marvellous and there is a lot of fantastic talent out there but unfortunately a lot of the old repertory theatres where actors used to cut their teeth have closed down so there are definitely fewer opportunities," he said. He advised budding thespians to look for other sources of income in case they struggled to find acting work, citing the example of his grandson, Jolyon Coy, who along with maintaining a successful acting career also works for a charity which helps people with autism.

Professor Ian Brown, from Kingston's Faculty of Arts and Social Sciences, worked with Lord Rix at the Arts Council in the late 1980s and early 1990s but his memories of him go back to childhood. "As a boy in a mid-sized Scottish town, I remember how, when there were Rix plays on the telly, the streets were empty," he said. "Brian Rix was a master of stagecraft and is a true legend."

Professor Brown praised the way Lord Rix had used his day job to help people and said that this, as well as his inspiring and illustrious theatre career, made him thoroughly deserving of his honorary degree from Kingston. "Brian Rix completely transformed community attitudes to disability," Professor Brown added. "He has never been interested in celebrity self-glorification but, instead, has used his recognition factor to improve how people with all kinds of disability are treated. He is a special man."