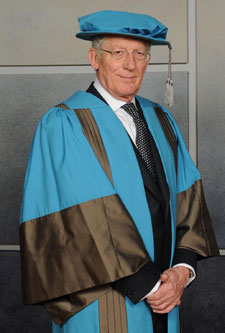 Businessman and TV presenter Nick Hewer has said he continues to remain deeply unimpressed by the current Labour Party and its leader Ed Miliband.

Mr Hewer, probably best known as Lord Alan Sugar's advisor on BBC1's The Apprentice, has also hosted the Channel 4 quiz show Countdown since January. He was speaking after receiving an Honorary Doctorate of Letters from Kingston University, recognising his outstanding contribution to business and entrepreneurship.

A lifelong Labour supporter, Mr Hewer said the party's current success in the polls had very little to do with its own leadership. "It's entirely by default that the opposition's standing is so strong at the moment - I have always been a Labour supporter and this is not their finest hour," he said. "The fact Labour is doing well in the polls is more a function of the uncertainty about the economy and the twisting and turning of Tory policies."

Referring to his previous scathing criticism of the Labour leader, when he described him as having "the weakest handshake in western Europe", Mr Hewer admitted he may have been a little harsh following his first brief meeting with Mr Miliband in a TV studio. "I just didn't feel he had the bearing of a leader or any inherent leadership qualities, although I am glad to see that he had a successful leader's speech at the recent Labour party conference," he said.

Although Mr Hewer received his honorary degree from the University for services to business and his support of entrepreneurs in Britain, he chose to address students on his reservations about tuition fees. "My real concern is that they will scare off bright youngsters from less affluent sectors of society," he explained. "I fear the result will be that only the well-to-do will be educated which can only serve to increase the class divide in this country." Everybody had the right to education, he added. "Just as free healthcare should be available to everyone, education shouldn't be reserved just for those who can afford it." 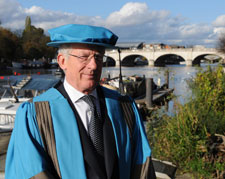 Dr Sunitha Narendran, head of the Department of Leadership, Human Resources Management and Organisation at the Kingston Business School, said there were many reasons why Mr Hewer was deserving of an honorary degree. "As a TV star, Nick is hugely popular and as a business leader he has made an impressive contribution to promoting entrepreneurship in this country. Perhaps most importantly, as a member of the public he has done his share in giving back to society through his vigour and commitment to helping make a difference to those born into less privileged circumstances," she said.

Educated in Ireland, Mr Hewer moved to London aged 20 to join a PR consultancy as a trainee. Within six years he had joined the board and eventually bought out the owner, becoming the sole shareholder. In the early 1980s his firm was selected to represent Amstrad and he soon became responsible for their press and PR worldwide, as well as Lord Sugar's personal media work. After selling his business in 1998, Mr Hewer took early retirement in southwest France but was later convinced by Sugar to take an onscreen role in The Apprentice.

He is currently on screen in the latest series of BBC1's Young Apprentice and has paid tribute to the teenagers on the show. "The youngsters we have on this series are brilliant - they always are," he said.  "They are much more open than their older counterparts on the main show. Even though they're equally competitive, they're less inclined to politically manoeuvre their way ahead."