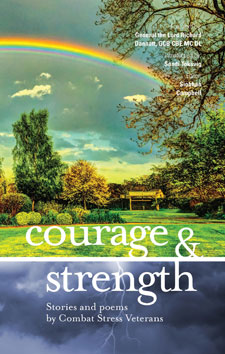 A poignant anthology of poems and stories written by military veterans who have suffered from mental health problems after serving in such places as Afghanistan and the Falklands is being released on Remembrance Day.

The collection, Courage & Strength - Stories and Poems by Combat Stress Veterans, is published by KU Press, Kingston University's commercial publishing arm. It contains more than a hundred original pieces of work by fifty people who have all been clients of Combat Stress - the mental health charity for veterans.  All proceeds from the sale of the book, which costs £9.99 and has an introduction by Sandi Toksvig, will go to the charity.

The idea behind the book came from two veterans, retired Wing Commander Peter Pugh, who served for thirty years with the Royal Air Force, and ex-artilleryman Peter Dobson, who was diagnosed with post-traumatic stress disorder in 1999 after suffering nightmares and flashbacks.  Many of the poems and stories grew from creative writing workshops for veterans run by Kingston University. The authors have served in such conflict zones as Afghanistan, Iraq, Bosnia, the Falklands, Northern Ireland and Africa.

It was thought to be the first time that creative writing academics had worked with veterans in this way, Kingston University's Head of the School of Humanities David Rogers explained. "We thought it was important to support the pilot series of creative writing workshops with veteran clients of Combat Stress UK," he said. "The resulting anthology demonstrates the remarkable writing ability of the contributors. Their experience, told through many voices, provides readers with a window into a side of military and post-combat experience not often encountered." 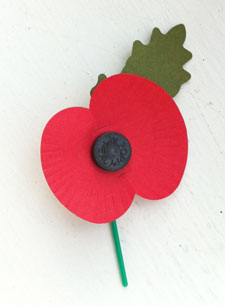 The poems gave people an insight into the emotions of those who have served their country, Peter Pugh, one of the project founders and contributors agreed. "Some of these guys came into the room and had to be persuaded to even pick up a pen, but by the end of the session they had written one or two poems - it was wonderful to see that transformation take place," he added. "They didn't know they had it in them, but when they wrote straight from the heart they produced great work."

Ex-head of the British Army Lord Richard Dannatt has lent his personal support to the book.  "It is exciting that creative writing can be added, as one veteran puts it as 'another tool to the therapeutic toolbox', and is testament both to the vision that Combat Stress has and to the work they continue to do with veterans in their care from all the Services and Merchant Navy," he said.

Senior staff at the charity explained that they hoped the book would raise awareness of the issues surrounding post traumatic stress disorder. "On Remembrance Day we pay our respects to those who made the ultimate sacrifice for our country. It is important that we also keep in our thoughts the thousands of veterans living with the mental scars from their armed service," Andrew Cameron, Chief Executive of Combat Stress, said. "Courage & Strength gives a powerful and thought-provoking insight into an illness that not only affects our brave men and women, but also their loved ones. Yet the anthology also speaks of hope and how veterans are rebuilding their lives."