A leading figure in automotive research and development has said that despite media reports to the contrary the future is bright for the United Kingdom's automotive industry.

Speaking after receiving an Honorary Doctorate of Science from London's Kingston University, Paul Darnell, Group Leader for Advanced Hybrid Control at Jaguar Land Rover, said he was optimistic for students completing their degrees. "Automotive engineering in the United Kingdom is currently showing considerable growth and there are lots of opportunities for career progression," he explained.

The media generally portrayed a negative image of home grown industry and engineering, Mr Darnell said. "We undersell ourselves as a country - we're in the top 10 of the world manufacturing league table and if you look at innovation, we're still 'Great Britain'," he added. "This is backed up by recent reports that, for the first time since 1976, Britain now makes more money from exporting cars than it spends on importing them."

However, while it is a good time to be working in the industry, Mr Darnell said there was still a shortage of UK-based engineers. "At Jaguar Land Rover we've taken on 4,000 recruits in the past 18 months, 480 graduates in the past two years and we're expecting to recruit another 280 in the coming year but certainly in my area we're still struggling to recruit experienced engineering professionals," he said. His comments came just weeks after United States' manufacturer Ford announced plans to close factories in Southampton and London with the loss of 1,400 jobs.

Mr Darnell's own career initially focused on instrumentation and testing. He developed the control system for one of the first fully automated drive-cycle simulation test facilities in the United Kingdom. After joining Jaguar Land Rover in 2001 as a principal engineer, Paul Darnell progressed through to his current role. He has accumulated several patents and received many awards during his career. Land Rover received the Queen's Award for Technical Innovation for the company's Terrain Response system, for which Mr Darnell was joint inventor, and he received a Director's Achievement Award for his role in developing Ford's Global Power Train control architecture.

"Engineering affects all aspects of our life, it's the backbone of 21st Century living," he said. "When I graduated 23 years ago, the engineering industry was more mechanically focused. Now approximately 50 per cent of a car's value is down to the onboard electronics. The world is our oyster - there are almost no boundaries to what we can do." 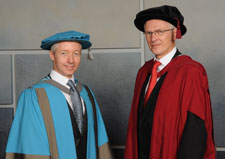 Mr Darnell said he hoped that awards such as his Honorary Doctorate would help to increase the visibility of the industry. "It's a great privilege and honour to get recognition for the effort we put in. Engineering is generally undervalued in this country and I firmly believe we've got to push its value up the agenda," he said. Part of that was building relationships with universities, he explained. "I've been involved with Kingston University for about three years working with the automotive engineering team and supporting some of the final year and postgraduate degree students. Such link-ups are beneficial for both universities and industry - the students get real life experience and we get some good research. It's a win-win situation."

Professor Andrzej Ordys, Head of Kingston University's School of Mechanical and Automotive Engineering, praised Mr Darnell for his proactive approach to enhancing learning and said he had been working with Kingston students on a research project looking into ways to reduce fuel-consumption. "Paul has not only made an outstanding contribution to the automotive industry but has also promoted collaboration between industry and education which impacts positively on our research, the student experience and teaching developments," Professor Ordys said. "He has made an enormous contribution to the sector through his work."