National recognition for design with a novel take on recycling

A highly unusual bicycle, designed to help recycle unwanted woollen clothes, has been selected as one of the best student design projects of 2012.

The National Centre for Craft and Design selected just 12 projects from universities across Britain for its Celebrating the Class of 2012 exhibition. They include the un-knitting machine, designed by Kingston University's Imogen Hedges.

The un-knitting machine is based on pedal power and built around an old bicycle frame. The un-knitter sits on a chair pedalling and wool passes through steam coming out of a kettle before being collected on a spindle.  Imogen's starting point for the project was the discovery that some charity shops devote hours to unravelling home-knitted jumpers. "They can make more money out of selling the wool than they can from the sweaters," the 22 year old from Milton Keynes explained. 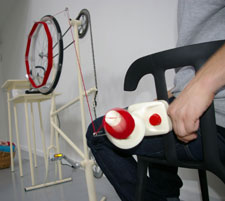 "My grandmother spent a lot of time knitting sweaters but my mum threw them all away once we'd outgrown them because she didn't think anyone would want them. With my machine you'd be able to take them apart and knit something new," Imogen added.

Imogen graduated from Kingston University in summer 2012 with a BA (Hons) degree in product and furniture design. Her machine will be on display at the National Centre for Craft and Design in Lincolnshire, which is the largest venue in England entirely dedicated to contemporary craft and design, from November 10 to January 6.