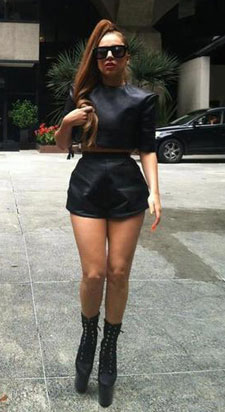 An outfit created by a Kingston University fashion graduate has been worn by global pop superstar Lady Gaga while on tour in South America.

The American singer, known for her flamboyant and distinctive personal style, was photographed in the south Brazilian city of Porto Alegre wearing designs by Lydia Stedman. Lydia, from Caerleon in south Wales, graduated with a degree in fashion from Kingston University London this summer. Her womenswear collection, which debuted at the 2012 Graduate Fashion Week, was spotted by one of Lady Gaga's stylists.

The 22 year old designer said she had been blown away to see Lady Gaga wearing her garments. The singer had chosen a pair of high-waisted leather shorts and combined them with a cropped leather T-shirt. "It's all been so surreal," Lydia said. "I'm a huge fan of Lady Gaga and saw her at Twickenham earlier this year. She wears the most amazing outfits, but I could never have dreamt she would choose one of mine. She's styled the look in a different way to my graduate collection - but it's even more exciting to see how my clothes have been mixed and matched to create something new." 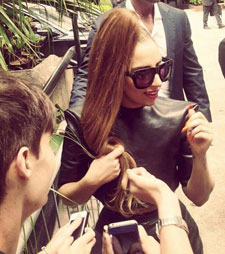 Lydia's designs combine wools and leathers to create monochrome, tailored womenswear which she said showed off the female figure using interesting textures and shapes. "The theme for my graduate collection was 'After Dark' which was prompted by the late nights that come with studying a course like fashion," Lydia explained. "From midnight walks to the library to early morning bus rides home, I took inspiration from everything I experienced. This included the flickering lights and reflective surfaces of an underground nightclub as well as the frightening shadows which used to set my imagination running wild."

The young designer said she had thrived on the excitement of presenting her collection at Graduate Fashion Week and would eventually like to move to London. "I love creating wearable clothing but there has to be something quite special and individual about it too, which is why I'd like to work in luxury fashion," she said. "Having my work showcased by a massive style icon such as Lady Gaga reminds me that anything is possible - she's truly inspirational." 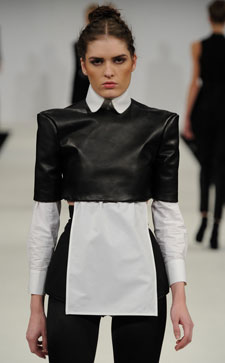 Academic director of fashion Elinor Renfrew said that Lydia's work had stood out during the selection process for Graduate Fashion Week. "Lydia has been a very strong designer throughout her time at Kingston University with the ability to translate her ideas into trend-setting fashion looks," she said. "To get this type of endorsement from somebody of Lady Gaga's iconic fashion is a huge boost to Lydia and a real testament to her design talent."

Lady Gaga burst on to the music scene in 2008 with her award-winning album The Fame. Nominated for six Grammy awards, the album has sold more than 15 million copies worldwide. Currently on tour with her third studio album, Born This Way, Lady Gaga has fans all over the world. Forbes rated her at number seven on their annual list of the world's 100 most powerful women while she sits on the Twitter top spot with 31 million followers - more than anyone else in the world.