Stay true to your point of view, Bourne director says 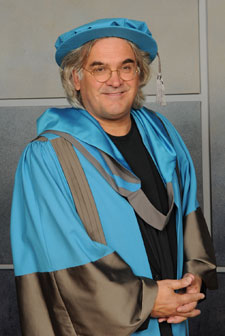 Universities like Kingston have a pivotal role to play in developing film-makers and journalists who have original perspectives in today's money-driven media landscape, according to the director of two of Hollywood's biggest action movies in recent years.

Famous for his quasi-documentary style of film-making, Paul Greengrass was speaking after picking up an honorary degree from Kingston University in recognition of his outstanding contribution to television and cinema. His back catalogue includes the Bourne Supremacy and Ultimatum as well as some unflinching examinations of notorious events of recent decades. From Bloody Sunday and the murder of Stephen Lawrence to the 9/11 terrorist attacks on America, the director has never shied away from tackling controversial subjects.

Speaking at the degree ceremony Mr Greengrass said the essence of film-making was having a distinctive point of view. "You have to be committed to your subject matter because it gives purpose to what you're doing," he explained. At ITV's Granada Television he had been lucky enough to work in an environment that had nurtured young people, he said. "Sadly, that seems to be less important in today's film and television industries," he added. "You have to fight to get your perspective heard and it's the committed voice with a strong view that cuts through." 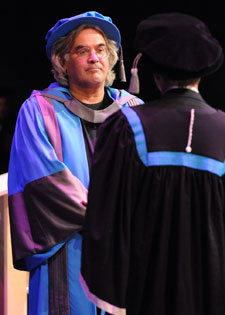 Mr Greengrass said there was a vital part for universities like Kingston to play in preparing young people to work in the creative industries. "Youngsters starting out probably aren't going to be supported and developed like I was in my early career, they're much more likely be chewed up," he said. "This places a greater weight on universities like Kingston, which is a breeding ground for talent, to educate kids about the importance of point of view - it's the easiest thing to lose but the most important thing to hold on to."

Mr Greengrass credits his early career as a journalist - travelling to political hot spots around the world - with being crucial in the development of his novel style of film-making. Shaky, hand-held camera work bringing audiences closer to the action and uncompromising treatment of hard-hitting subject matter, have become synonymous with his work.

Kingston University Professor of Journalism Brian Cathcart said Mr Greengrass was most famous for great action movies but that his contribution to film extended much further. "He's a very skilful, groundbreaking film-maker who has lifted the whole action movie genre to a new level," he said. 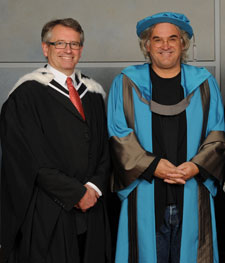 Professor Cathcart believes it is the Greengrass individual style which makes the portrayal of the 9/11 plane hijack in the movie United 93 a particularly powerful piece of cinema. "Paul is driven by a desire to tell stories and right wrongs which makes it, to my mind, one of the great films of recent times," he said. The film had attempted to understand events that stimulated strong emotions for many people. "He puts the camera so close that our understanding of the event - even of the hijackers - is enhanced and the way we relate to the world around us is enriched," he said.

It was important for Kingston University students to see that Paul Greengrass did not come from a privileged background and was at heart just a hard working journalist, Professor Cathcart said. "Paul is an ordinary guy who has got where he has by using his immense drive, skill and ambition to enable him to do extraordinary things," he said.

The multi award-winning director has just finished a film about the capture of the captain of an American container ship by Somali pirates. "It's a powerful story about the global economy," he said. "I felt very strongly that I wanted Somali actors to play the pirate roles in the film, so we worked with some vibrant Somali refugee communities in the US and Britain to cast four young actors to play alongside Tom Hanks in the title role." The film, Captain Phillips, is set for release in 2013.

As well as two films from the Bourne trilogy, Mr Greengrass also directed a film about the murder of Stephen Lawrence (1999), Bloody Sunday (2002) - a powerful exploration of events during an Irish civil rights march in 1972, the 9/11 epic United 93 (2006), for which he won the BAFTA award for best director and Green Zone (2010), in which Matt Damon stars as an American soldier in search of weapons of mass destruction in Iraq. He also co-authored Spycatcher, the candid autobiography of a senior MI5 agent.