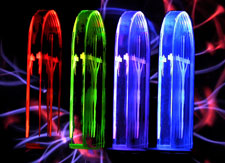 Christmas lights of a less traditional type were aglow in the south garden of All Saints Church in Kingston town centre as it became the focal point for an arts event staged by Kingston University. Film produced by more than 40 students from the University's School of Fine Art was beamed on to the side of the building and on small television sets next to gravestones in a three-hour exhibition entitled Lumiere et Son-Son et Lumiere. Supported by Kingston Council, the works, all inspired by the historic site in the heart of the borough, were also be accompanied by the University's own Chamber Choir. 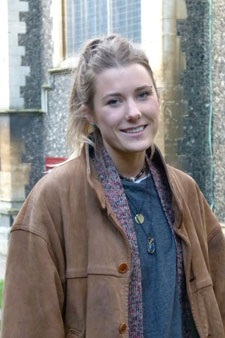 Fine art student Hannah Gill was intrigued by the parallels between people's historical relationship with religion and their modern relationship with technology and produced a myriad of abstract colours and shapes to put on show. "Today, people put their faith in technology as easily as perhaps as they once put their faith in religion," the 20 year old said. "When technology goes wrong, you are reminded of its limitations, but also how much you need it, and I think it can be the same with religion. My part of the film explores this idea."

Event organiser Professor Frank Millward said the students had been fired up by the opportunity to showcase their artwork in the centre of their alma mater's hometown. "It's a YouTube world today. Every minute, hours of film footage are uploaded online and, as artists, we have an opportunity more than ever to use art to remind us of where it is we have come from and where it is that we may be going," he said. "Art tells stories about our past and offers possibilities for the future. If what we see excites us, then we pass that story on, and that's what we're hoping to capture with this installation."

A church has stood on the grounds of the current All Saints Church for more than 1,000 years. It is the place where the original Coronation Stone is thought to have been kept in the Saxon Chapel of St Mary. It is also widely believed to be the site of the crowning of at least two Anglo-Saxon kings, and possibly as many as seven, during the 10th Century, including Athelstan, the first king of a unified England in 925, and Ethelred the Unready in 978-9. Nothing remains above ground of the original Saxon church except for outlines marked by stones outside the south door of the present building.

Find out more about studying Fine Art at Kingston University.