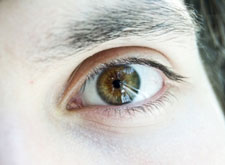 Whether the human eye was created by an unexplained miracle or through evolution was the hot topic at Kingston's second Café Scientifique - a community event in which members of the public can debate the latest advances with experts from Kingston University.

Dr Richard Cook, Deputy Head of the University's School of Life Sciences, opened the discussion on opposing views on the origin of the eye before inviting questions from the audience. Both scientists and lay people were encouraged to attend the event, which aims to make complex arguments understandable to all.

In the debate, Dr Cook challenged the so called "intelligent design" argument which claims that features such as the eye are so complex that they must have been made by a creator, rather than through Charles Darwin's theory of natural selection. Advocates of intelligent design say it is evidence-based scientific theory about life's origins and not a religious movement. It developed in the United States in the late 1980s to get around a court ruling that barred the teaching of creationism in schools. Proponents would like the subject to form part of the curriculum in the US.

Dr Cook said he chose the eye as an example of science versus intelligent design because Darwin himself famously said he was puzzled how such a complicated structure as the eye could have evolved. "I wanted to have a look at the two arguments and show that evolution can explain the development of the eye," he said. "It's timely because intelligent design is growing in popularity in the United States and the United Kingdom and because, in the past five years, we have learned so much about the relationship between molecules and genes, providing us with more evidence of the role of evolution."

He acknowledged that the topic was a controversial one. "I don't want to offend anyone's religious views. This isn't about proving or disproving the existence of God. As a scientist I don't believe that intelligent design is an appropriate method of trying to explain the nature of life but I hope that people with different views will come along and share those with us."

Café Scientifique has spread to more than 40 towns and cities in the United Kingdom since it began in Leeds in 1998. The idea is based on Café Philosophique, which philosopher Marc Sautet launched in France in 1992.