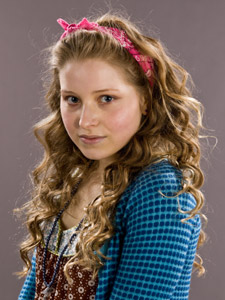 From an art course in Kingston to the red carpet of Leicester Square - a former Kingston University student has swapped paintbrushes for wands after beating 7,000 other hopefuls to appear in Harry Potter and the Half-Blood Prince.

Jessie Cave plays Lavender Brown - love interest of Harry's flame-haired sidekick Ronald Weasley - in the film that is now being snapped up on DVD as a Christmas stocking filler.  Although her acting career has now lifted off as fast as a Firebolt broomstick, the Kingston Foundation Art graduate is still awestruck when she looks back on the whole magical experience.

For the sixth instalment from JK Rowling, Jessie joined global stars Daniel Radcliffe, Rupert Grint and Emma Watson to face a world in which the evil wizard Lord Voldermort continues to gain power.  Headmaster Dumbledore, played by Michael Gambon, prepares Harry for his final battle with 'the dark lord' while the trio of friends also battle teenage hormones as love begins to blossom amid uncertain times.

"Harry, Ron and Hermione are a close-knit team of characters so it was a little daunting to go in and be the new face on set," Jessie, who is a Harry Potter fan, recalled.  "Lavender plays Ron's first girlfriend, and in my very first scene I had to kiss Rupert Grint, so there really wasn't any time to get too nervous."

Jessie said being on location for Harry Potter and the Half-Blood Prince was just like walking into the pages of the book.  "The sets were absolutely beautiful and the attention to detail was astounding, especially the Great Hall, the Gryffindor Common Room and Dumbledore's Office.  It was amazing to see all those fairytale settings straight out of the book right there before my eyes," she said.

Jessie's big break into acting wasn't quite by the book however.  The 22 year old started off working in the art department at The Unicorn Theatre in London on a stage management internship.  "It was so inspiring - we got to make all sorts of amazing props for the children's shows including a full-size chandelier made out of crisps," she said.

Surrounded by talented actors and inspiring scripts, Jessie soon found herself longing to step out from behind the scenes.  "After watching an actress warming up, I secretly wished I could do the same," Jessie said.  The budding star decided to audition for an agent and quickly got a part in an advert for Nokia and then a bigger role in the film Inkheart.  "Landing the part of Lavender Brown was completely unexpected though, especially as more than 7,000 people auditioned," Jessie said. 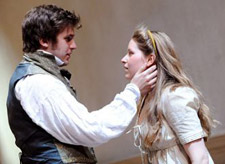 Jessie's not just found herself a surprise star of the big screen either. She's also been treading the boards as Thomasina in Tom Stoppard's Arcadia - a role that saw her appear with the playwright's own son, Ed Stoppard, at the Duke of York's Theatre in the West End.  "Being in the show was life-changing.  It was the hardest, most exciting, most terrifying and brilliant thing," Jessie said.  "With more than 100 performances under my belt, I feel so much more secure now with my ability as an actress - largely down to the development of my voice which has truly grown in strength."

While the new year brings a fresh schedule of filming for the next enchanting Harry Potter film, Jessie hasn't abandoned her passion for art altogether.  She has turned a room in her house into a mini studio so she can keep painting, drawing and writing alongside her acting career.  "I will always draw, and I love to write too.  I tend to gravitate back to both when I want to be in charge of my creative output," she explained.  "In acting you do have a certain amount of control with your portrayal of a character, but with a blank sheet of paper, the choice is all yours.  Nobody can tell you what to draw or what to write."

And she can count some of her Kingston University lecturers and course mates among some of her biggest fans.  Her course tutor Mark Harris said Jessie's natural talents were clear to see even as she studied her Art Foundation course.  "Jessie's all-round creativity shone through in her work," he said.  "Combining this flair with both visual and performing arts will certainly make for an exciting career."