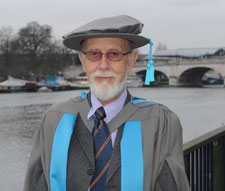 An engineer who devised one of the United Kingdom's first large scale computer-aided design systems and worked on complex industrial control systems has been made an honorary fellow of Kingston University.

David Lindsley's high-flying career began after he studied electrical engineering at Kingston Technical College - which became part of Kingston University in 1992. One of his assignments at a local power station so inspired him that it led to a lifelong involvement with large industrial plants, ships and water treatment works.

Now retired Mr Lindsley, who taught at the university in the 1980s, continues to work with Kingston's Faculty of Science, Engineering and Computing, helping to promote engineering as an exciting and fulfilling career.

"I had an amazing time as a student at Kingston," he recalled after receiving the award. "We covered a vast range of subjects - you could be working on a lathe one minute and studying quantum physics the next." He went on to become a successful systems engineer and a director of his company - roles that took him around the world to Africa, China, Japan, India, East and West Europe and the United States. Engineering was not just about boiler suits and greasy hands, he said. "I'd recommend it to anyone - it uses your mind in a way that few other subjects will. It gives you the opportunity to travel and meet people and to change the world for the better," he enthused. "It allows you to get involved in everything from building nuclear power stations to designing the chips that go into phones and domestic gadgets."

For the past 30 years, Mr Lindsley has been involved with the Institution of Engineering and Technology, which works with universities such as Kingston, accrediting courses and offering students advice and information.

He is so concerned about the dearth of engineers in Britain and the need to attract young talent that he has even published three novels featuring an engineer as the hero. "I was pinned down by a typhoon in Hong Kong, and it was either retire to the bar or write a novel," he said. His first book, Far Point, was published in 2009 and won a major prize in the Engineering Media Awards literary contest. A sequel, The Darkfall Switch, was published in 2010 and a third, Blind to Danger, appeared in 2011. He is also the author of two reference books on power station instrumentation and control.

Mr Lindsley spent most of his working life with a subsidiary of industry giant Babcock, Bailey Meters and Controls, which engineered complex control and instrumentation systems for the power, water and marine industries. He became director of engineering and introduced a major breakthrough in 1980 when he helped to implement one of the first large scale computer-aided design systems. This helped the company win valuable export orders because it could offer a rapid and efficient engineering design process. Although computer-aided design is now the norm, at the time many companies still relied on draftsmen with compasses and protractors to do manual designs.

In 1982 he left to set up his own consultancy practice, which provided engineering services to power and water companies worldwide. The company operated for 25 years until Mr Lindsley retired in 2007.

Head of the University's School of Mechanical and Automotive Engineering, Professor Andrzej Ordys, said that Mr Lindlsey was being made an honorary fellow in recognition of his outstanding contribution to the engineering industry and to the University's Faculty of Science, Engineering and Computing.

"David is a distinguished chartered engineer with a career spanning more than 40 years." he said. "He is also an active promoter of the engineering profession." 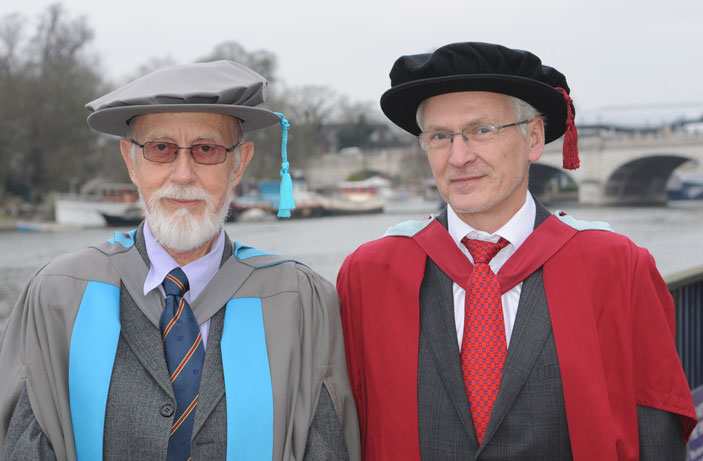