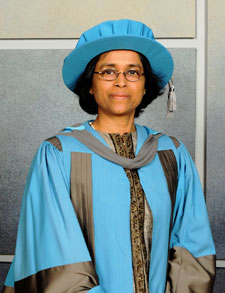 A leading educator has relived her struggle to fund her degree studies with a group of new graduates from Kingston University. Professor Geeta Gandhi Kingdon, chief operating officer at City Montessori School and Degree College in Lucknow, India, was speaking after being awarded an honorary degree from the University in south west London.

Commenting on higher tuition fees introduced in England last year, Professor Kingdon, who is also Professor of Education and International Development at the Institute of Education, London University, said the importance of higher education went way beyond the potential for a higher salary. "The value of a good degree is greater than just the economic return that accrues from it," she explained.

While acknowledging the increased costs of education meant that most students did not have a choice but to hold down jobs while studying, she said there were benefits to working while at college. "It is character building and the experience you acquire being in the world of work while studying represents an investment in yourself," she added. "It certainly gave me the confidence to stand on my own two feet."

Her time as an undergraduate had involved hard work both inside and outside the classroom, Professor Kingdon recalled. "As an international student, I was paying very high fees so I had to find ways to fund my studies," she said. "I worked at Perfect Pizza, as a cleaner at an office block in Edgware and as a tea-lady at Boosey and Hawkes. I also did private home tuition in maths, was a sales assistant in Marks and Spencers at Brent Cross and was a domestic help for a lady in Golders Green."

There had been a surprising amount of competition for those jobs, she said. "I remember once wanting to work at a particular patisserie so I bought a smart dress at Oxfam but then sadly didn't get the job. I carried out all this work out of necessity rather than choice but picked up a lot of very useful skills along the way."

Addressing students graduating with business and law degrees, Professor Kingdon reminded them that there were many international opportunities open to them. "Young people today are highly mobile, especially as many countries now have more enlightened immigration policies," she said. "As a skilled person, your investment in education really has made the world your oyster and you will find you can get great returns on that investment in many parts of the world."

Professor Kingdon held the Robert McNamara Post-Doctoral Research Fellowship at the World Bank, a lectureship at the University of Bristol and a research officership at the Department of Economics University of Oxford, before moving to the University of London in 2007. Her DPhil and post-doctoral research has focused on the economics of education and her research interests include school effectiveness, gender in education, the political economy of education and the economic outcomes of education. According to the Guinness Book of Records, City Montessori School is the world's largest school in terms of pupil numbers, with more than 45,000 students currently studying there. In 2002 it became the only school in the world to have ever received the UNESCO Prize for Peace Education.

Kingston Business School Professor Richard Ennals said Professor Kingdon had made a phenomenal contribution to education and international development. "In a changing globalised world, Professor Kingdon is a leading figure in education in both India and the United Kingdom and has a strong international development perspective," he said. "It is fitting that we celebrate this at Kingston where we pride ourselves on being an international university with a diverse student body and collaborations across the globe."