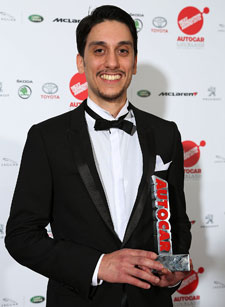 An engineering student from Kingston University had car industry giants all revved up when he won a prize for developing a new braking system.

Roberto Antonio Pace, 25, has carried off the Autocar-Courland Next Generation award for designing a cylindrical brake - a third generation system he hopes might one day replace more conventional drums and discs.

"I came up with the idea when I was researching the main problems with the current systems fitted out in vehicles," Roberto said. "I had a hunch that using a different shape would create a more even heat flow, producing better performance."

Roberto, who has just completed a masters degree in automotive engineering at Kingston, used computer-aided design to test his new brake. He also built a prototype and assessed the financial and commercial viability of the scheme.

Roberto, originally from Messina on the Italian island of Sicily, explained that since his system had the same layout as a conventional braking design it would be easy and inexpensive to swap a disc brake for a cylindrical one. "It would take about a year to develop my cylindrical brake into something that could be used by industry. However, given that the manufacturing costs should be similar to existing systems, I really hope one of the big car companies might take it up," he added.

In the meantime, Roberto is gearing up to begin the first stage of his prize - a five-month work experience package with sponsors Jaguar Land Rover, McLaren Automotive, Peugeot, Skoda and Toyota. He also won £7,500.

McLaren's chief engineer Neil Patterson praised Roberto's ingenuity. "In-wheel braking hasn't seen significant evolution for decades. For me the most impressive thing is his courage to challenge the status quo by taking it on in the first place," he said. Roberto had shown real initiative in making sure his design could be used in a high-performance sports car and had begun to answer some of the unknowns about it, Mr Patterson said. "Perhaps wisely, he stopped short of putting it on his own motorcycle," he joked.

Autocar editor-in-chief Steve Cropley and Kevin Gaskell, chairman of Courland Automotive Practice, presented Roberto with his award at the Society of Motor Manufacturers and Traders' annual dinner. "Roberto can be justifiably proud of his achievement," Mr Cropley said. "The level of entries was extraordinarily high and he completed three tough judging processes." The brief for the contest, launched in 2009, was to propose an improvement which would benefit the United Kingdom's automotive industry.

Roberto still has close connections with Kingston University and is playing a key role in its bid to enter the Formula Student competition. The contest challenges students to design and build a single seat racing car fit to compete at the Silverstone race circuit in July.

More than 20 Kingston automotive engineering enthusiasts are working on the project. "As a Kingston student I have already achieved something as an individual and now I am determined to achieve something as a team member too," Roberto said. "We are all passionate about our subject and willing to show what we are capable of in a real-world environment."