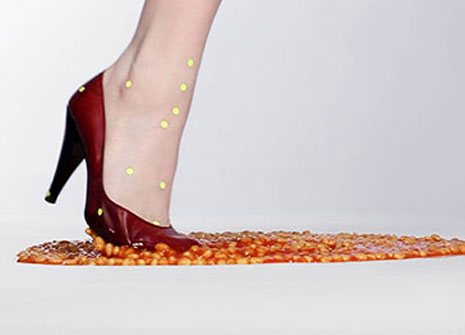 High heels can be challenging even on the most level of surfaces, but Kingston University research fellow Marloes ten Bhömer has questioned the very tradition of shoe making by testing them on some unlikely surfaces for her latest research. Jelly, coal, cake and foam were just some of the materials on trial, with the results captured in slow motion and presented as part of her new exhibition at Kingston University's Stanley Picker Gallery in south west London.

"I started by writing my own definition of what a shoe was and then pulling it apart. Shoe-making is steeped in tradition and I wanted to start again and use my own research to inform how a foot really moves in a high heel and the support it needs for this sometimes painful position," Ms ten Bhömer explained.

Using a slow motion Phantom Camera, Ms ten Bhömer captured her own progress in a high-heeled shoe across surfaces, which even included baked beans and a cream cake, at some 500 frames per second. The result is now playing across 10ft of wall at the Stanley Picker Gallery. "As the heel strikes the surface, you see the shoe's structure strain and reverberate in great detail, particularly with the harder surfaces like coal," the Dutch-born designer said. "People seem mesmerised by the footage I have captured. The jelly clip is particularly effective as the detail of the ripples across the gelatine is astounding. I made sure the material was really dense - the heel doesn't even strike the floor." A product designer by training, Ms ten Bhömer also worked with Kingston University's sports scientists to capture and analyse the movement of her own foot in pieces she designed to test new areas of support. 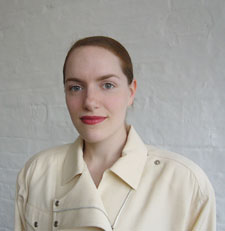 Visitors to Kingston University's Stanley Picker Gallery will be able to explore Ms ten Bhömer's research for themselves until April 6. Her exhibition features prototype nylon shoe designs alongside silk screen prints developed from computer images. Film clips of women facing perilous situations, such as scrambling up a cliff, are also on display as part of the exhibition. "I am particularly intrigued by the way women are portrayed in films and the important role their footwear and the surface on which they walk can play in conveying their characters," Ms ten Bhömer added. "It may be their heel breaks, or they slip, wade, or have to crawl across difficult terrain. The shoe and its interaction with different materials can transform a character's identity."

Director of the Stanley Picker Gallery David Falkner said he had been intrigued by the way Ms ten Bhömer had combined technology, science, design, fashion and art in her work. "Marloes ten Bhömer's work is not necessarily associated with the production of garments. She is thinking beyond shoe design and using her creativity to ask the most basic questions of design - how and why it exists, and how could it be different," he said. "This intensive level of research really opens up the subject. Her approach to design from an engineering perspective is innovative and her use of such a wide variety of mediums, from digital media to silk screen printing, gives gallery visitors a real insight into her work."

Trained as a product designer at ArtEZ Institute of Arts in the Netherlands and the Royal College of Art in London, Ms ten Bhömer has been involved with Kingston University's Stanley Picker Gallery for the past 18 months as one of its Stanley Picker Fellows. She has also just been appointed as a research fellow in the University's Faculty of Art, Design and Architecture and is eagerly anticipating working with art and design students after Easter.