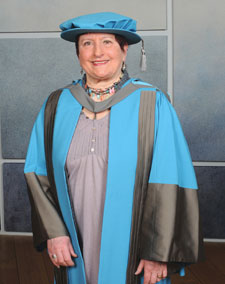 Acclaimed soprano Jane Manning has hit out at people she says are trying to relegate classical music to dusty archives.

Dr Manning was speaking after receiving an honorary degree for her outstanding contribution to contemporary vocal music performance and scholarship from Kingston University. After studying at the Royal Academy of Music and later in Switzerland, Dr Manning has acquired more than 45 years' experience in an exceptionally wide-ranging repertoire.

"The term ‘music' now frequently only seems to refer to two categories: ‘popular' or ‘opera', so classical contemporary music is being banished to an arcane backwater," Dr Manning said. "Sadly, judging only by popular and commercial success, Andrew Lloyd Webber could well be considered the greatest composer of all time - bar none! I think that in general people are now made to feel almost apologetic when admitting a love of serious music - but I believe the wheel will turn and quality will out."

Dr Manning said although strides had been made to promote classical music on the radio, more could be done. "We need high-profile people to influence the public and not be intimidated by the cheaper elements of media hype," she said. "Classic FM has promoted many works successfully but, unfortunately in a somewhat indiscriminate way, juxtaposing the flimsy and ephemeral alongside the great which perhaps encourages the audience to lose the ability to listen for long spans. Instant gratification is the modern priority."

Since her London debut in 1964, Dr Manning has given more than 350 world premieres and has worked closely with such composers as Boulez, Birtwistle and Cage. Operatic roles have ranged from playing the Governess in Britten's Turn of the Screw at Wexford, to creating the main role in Knussen's Where The Wild Things Are for the Théâtre de la Monnaie, Brussels. Dr Manning's extensive recording catalogue includes works by Berg, Dallapiccola, Ligeti and Schoenberg. She has performed in countless BBC broadcasts and international engagements have taken her to most of the leading festivals and centres, such as Vienna, Paris, Berlin. 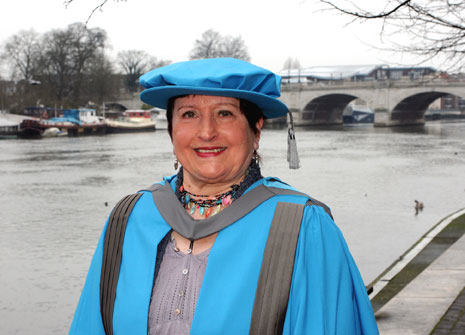 After six years as honorary professor at Keele University, Dr Manning became AHRB Creative Arts Research Fellow at Kingston University, undertaking a major study of Pierrot Lunaire, of which her interpretation, matured over 47 years, is regarded as definitive. She is currently a visiting professor at the Royal College of Music.

Speaking to students graduating with social science and performing arts degrees, Dr Manning praised the work of music departments such as Kingston's and said music graduates would always be in demand. "Kingston retains a vibrant, thriving and wide-ranging department with a fine reputation," she said. "I recently heard a captain of industry say that, when considering job applicants, he would always favour music graduates, for their flexibility and their gift of being able to get on with all kinds of people."

Dr Tim Ewers, Kingston's Director of Studies for Music, said that since the 1960s Dr Manning had been the United Kingdom's best exponent of contemporary classical vocal music. "She has worked with all the great composers of the period and given more than 300 first performances of new works," he said. "It was a great honour to have her at Kingston working with us and it is fitting that we were able to recognise her in this way."