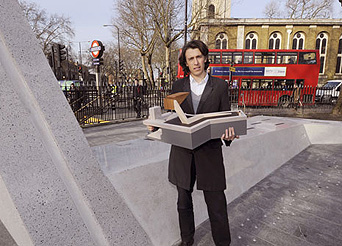 A Kingston University graduate's design for a WWII memorial is being built at the entrance to East London's Bethnal Green tube station to mark the place where the conflict's worst civilian disaster took place.

As the air raid sirens rang out across London on March 3 1943, hundreds of people headed underground to safety at Bethnal Green where the tube station was under construction. Plagued by bombing raids, Eastenders were no strangers to taking shelter, even in the pitch dark of a blackout. Working their way down the temporary steps that night, however, a lady carrying a child fell. The crowd pressed on into the darkness not knowing about the accident in the stairwell below. The resulting crush led to the deaths of 173 people, including 62 children, and injuries to 90 more. 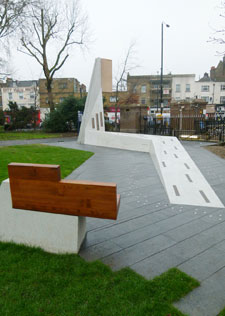 Kingston University graduate Harry Paticas, whose practice Arboreal Architecture is based just around the corner from the station, was unaware of the disaster until a plaque caught his eye one morning on his way to work. "Where it was placed was just the sort of spot that people would rush past on their daily commute," Mr Paticas said. "I was determined to find out more about the disaster and I couldn't understand why such a great loss of life warranted only a small plaque. I felt sure there was a way to use my skills as an architect to help create a fitting tribute for these people and their families."

After six years' fundraising, designing, planning and negotiation, phase one has now been completed. It includes a white concrete plinth set in a landscaped area of granite slabs. As well as listing all the names of those who died, bronze plaques placed along the memorial feature testimonials from survivors, emergency services personnel and relatives of the victims. A reclaimed teak bench overlooking the area offers passers-by and family members a place for reflection, while a small light set in the ground matches the 25 watt light bulb that served the stairwell that fateful night. Funds for a stairwell-shaped canopy, also to be made of reclaimed teak, are still to be raised. Mr Paticas hopes the memorial can be completed later this year - 70 years on from the disaster. 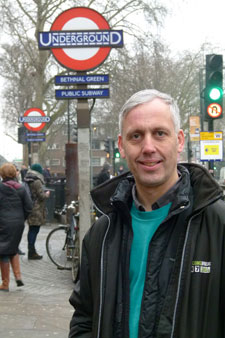 Principal lecturer in architectural history Dr David Lawrence taught Mr Paticas when he was studying architecture at Kingston University and said he felt the design would create a quiet place away from the busy intersection of Cambridge Heath Road, Bethnal Green Road and Roman Road. "The memorial is a tribute to both the terrible tragedy at Bethnal Green and the timeless values in architecture which have long been a tradition of teaching at Kingston University," Dr Lawrence said. "The materials recall the frightening void of the stairwell and elevate it skywards in a positive sculptural form." The canopy is designed so that sunlight will shine directly through 173 cone-shaped holes to create a point of light on the pavement below for each life lost.

Every piece of material that has been used in the memorial has a story behind it. The wood that will make the stairwell canopy is perhaps the most unusual. "The canopy will be made from reclaimed teak recovered from a ship that was sunk in World War I," Mr Paticas explained. "We wanted to use wood because it is a soft, gentle material appropriate for a memorial. But, it had to withstand the elements, so we needed to find a sustainable hard wood source, which we did. I just didn't expect it to come from the bottom of the Irish Sea."

Secretary of the Stairway to Heaven Memorial Trust Sandra Scotting lost a grandmother and cousin in the disaster, while her mother was one of those rescued alive. She said that the tragedy devastated a generation in her community and praised the work done by Mr Paticas for the charity. "He's poured his heart and soul into the project - it's even better than we could have imagined," she said. "His attention to detail has been breathtaking and the symbolism in his choices of shape and materials has created something people will definitely be moved by. The survivors and their families have waited 70 years for this." 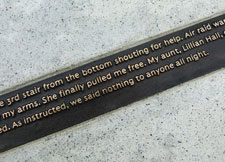 Mr Paticas had his model of the memorial accepted for the Royal Academy Summer Exhibition in 2012. "I wonder how many thousands have passed through the station and never known anything about this tragedy. This project has been a labour of love but I hope, once the memorial is complete, people will take the time to visit and learn more about this historic event." 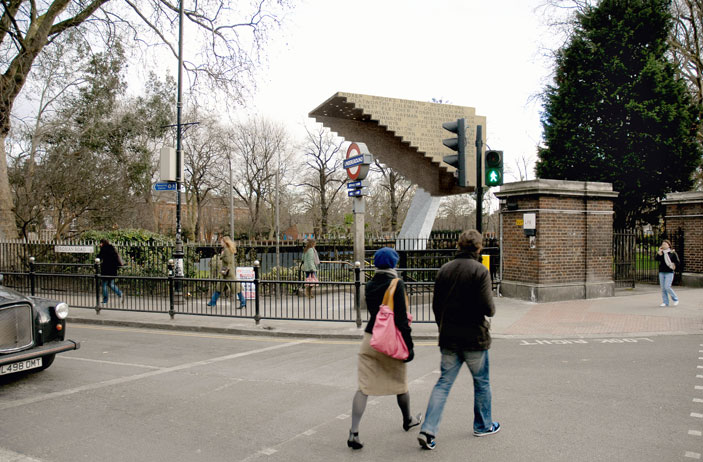