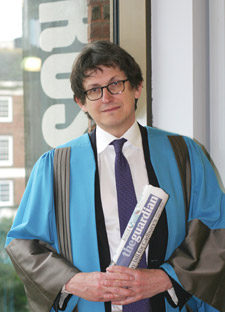 Two of the United Kingdom's most distinguished journalists were recognised by Kingston University this week for their work in the media. Guardian editor Alan Rusbridger and Financial Times expert commentator Martin Wolf picked up honorary degrees watched by hundreds of students graduating at the Rose Theatre. Graduates from the Faculty of Arts and Social Sciences heard about the changes the pair had witnessed in the newspaper industry on a scale not known for more than a century. They also picked up tips to help them as they start out in their professional careers.

As editor of the Guardian for the past 14 years, Mr Rusbridger led in the development and launch of the Guardian's Weekend section and then its G2 section, both of which quickly established themselves as media industry leaders. He has distinguished himself as an innovator and stout defender of serious journalism, enhancing his newspaper's reputation both at home and abroad and winning many awards along the way.

Mr Rusbridger, one of the longest-serving editors currently in post, said he was proud to pick up his Honorary Doctorate of Letters for services to journalism. "This is recognition of the importance of serious news organisations in a world which, more than ever, needs reliable, verifiable and open sources of information," he said. "News organisations are under threat - from governments, from changing funding models, from technological revolution. Universities play an important role in debating and shaping the future of news - and also in training future generations of journalists." 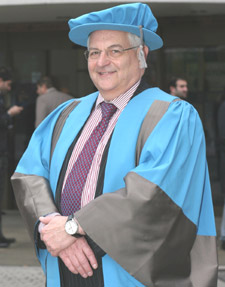 Award-winning Financial Times journalist and respected columnist, Martin Wolf's articles are widely read for their insight and authority and became a staple diet for readers wanting an insight on the recent financial crisis. As a modern journalist, he makes substantial use of the internet as a medium for dissemination and discussion; his internet home page at the FT offers podcasts, an archive of previous articles and a discussion forum in which leading commentators discuss the issues he has raised.

A former senior economist at the World Bank, Mr Wolf was made Commander of the British Empire (CBE) in 2000 for services to financial journalism and is a published author. He picked up his Honorary Doctorate of Letters from Kingston University for his contribution to the public commentary and analysis of significant events in the economic and financial environment.

Mr Wolf said he was immensely pleased to receive an honorary degree from Kingston University for his lifetime's work. "I feel particularly pleased because it is also recognition of the role of serious journalism at a difficult time for the press," he said. "I am delighted that the Financial Times came through the crisis - both the wider financial and economic situation and the newspaper industry crisis - with flying colours, commercially and editorially." He told graduates: "Journalism, even at its best, is imperfect. There are few of us and many stories to cover. Often we miss things. Often we get too close to our sources. But consider what the world would look like without serious and professional journalism which continues to be the bedrock of democracy. Long may it survive."

Professor Martin McQuillan, Dean of the Faculty of Arts and Social Sciences, said it was a privilege to award honorary degrees to two of the UK's most distinguished journalists. "Both Martin Wolf and Alan Rusbridger have done much to raise the tone of public debate through their acute analysis, professional integrity and dedication to speaking the truth," Professor McQuillan said. "It is often thought that the complexity of academic thought and the needs of journalism are incompatible with one another. However, in reality there is an ever closer tie in today's cultural sphere between quality journalism and the work of the university. As stakeholders in knowledge, both have much to learn from each other.  I hope that our graduating students will aspire to the achievements of Rusbridger and Wolf." 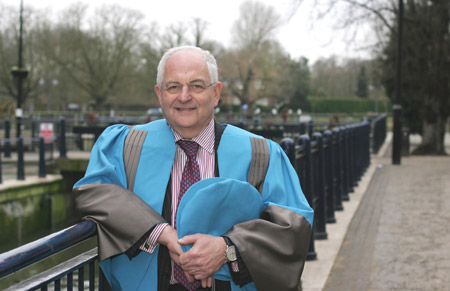 Find out more about our undergradute courses in journalism, media and communications, or our postgraduate courses in humanities.