The third year architecture students' work, which has been on display at Ecobuild in east London, is a one fifth size scale model of Salisbury Cathedral's spire - the tallest in Britain.

"Inside Salisbury's stone spire, there is a complex medieval timber frame structure which allows ongoing maintenance of the stone work from the inside. This was a considerable innovation in the early 14th Century," senior lecturer at Kingston University Tim Gough explained.

The students have had to rework the original design so that the spire can stand without the outer stone covering and to incorporate a means of taking it apart so it could be split into smaller units when being transported. It is made from wood sustainably sourced in Scotland.

A 150-square metre exclusion zone was set up around the spire as it was raised into position at Ecobuild at London's ExCel centre. It was on display at the show between March 5 - 7. Experts from the University were among the 750 speakers at Ecobuild where more than 1,500 building products were on display.

"The spire was constructed primarily for temporary installations, with the view that it could be assembled in many places, many times," architecture lecturer Takeshi Hayatsu added. "It is our intention that installing the spire will become an event adapting to each unique situation and condition." 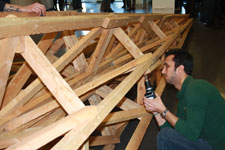 This is the third consecutive year that Kingston University's School of Architecture and Landscape has had a presence at Ecobuild. The spire is part of a wider project which involves all Kingston's architecture students looking at United Nations world heritage sites. Mr Gough and Mr Hayatsu said their group of students was particularly interested in 'the human ambition to build a landmark'.

As well as the spire, the University exhibited films of some of its previous collaborations with clients, including Design for London, and delivered talks about its campaign to get United Nations world heritage status for the London pub. During the current academic year, students are developing the 350-page document that is required to be submitted to the British government - the first stage in a process which, they hope, will lead to the London pub being recognised by the United Nations Educational, Scientific and Cultural Organisation (UNESCO). 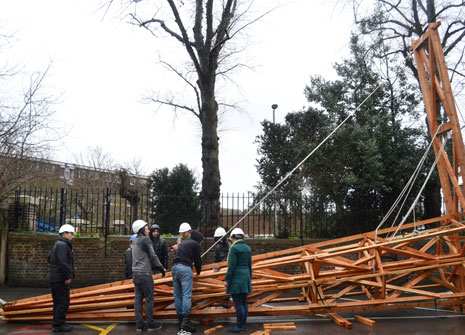 The project does not aim to protect any specific pubs - UNESCO has a tradition of listing ‘types' of site, from prehistoric caves in France to modernist housing estates in Berlin. The team at Kingston believes its bid is similar to the currently protected Viennese Coffee House culture.

"Kingston's presence at Ecobuild has established the University as a centre of expertise across various disciplines dealing with the built environment," enterprise manager at the Faculty of Art, Design and Architecture, Peter Christian, said. 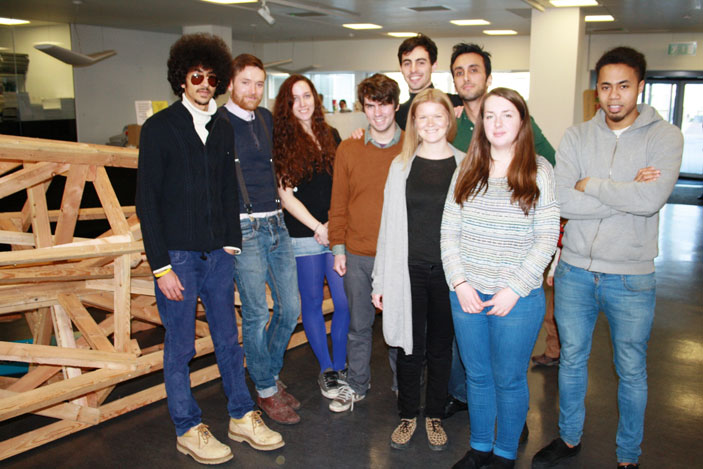