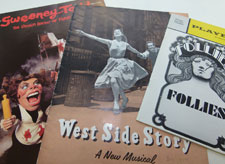 A treasure trove of musical theatre memorabilia from the work of one the most famous composers of recent times is to be held at Kingston University. Capturing highlights of the career of Stephen Sondheim, the extensive collection is made up of a raft of theatre ephemera from some of the most popular productions to grace the West End and Broadway during the past five decades. It includes vintage programmes, flyers, posters and reviews of such stage hits as West Side Story, Company, Follies and Sweeney Todd.

Originally compiled by United Kingdom-based theatre collector and Sondheim enthusiast Peter Wood, the collection - which was sold to The Stephen Sondheim Society in 2008 - has a British slant. Amongst the most striking items are the oversized posters from some of the American composer's most famous shows. Documenting the changing style of theatre design over the years, the colourful signs offer a whistle-stop tour through the back catalogue of one of theatre-land's most successful sons. One of the oldest is a billboard for the 1958 London production of West Side Story, for which Sondheim wrote the lyrics to accompany Leonard Bernstein's score. The show gave the young composer, who was mentored by musical theatre great Oscar Hammerstein II, his first real taste of success.

A delve deeper into the archive uncovers a few unusual pieces. Amongst the Sweeney Todd paraphernalia is a promotional apron, complete with fake blood splatters and artwork from the original 1979 Broadway production. The musical about the murderous barber, which was turned in to the hit 2007 movie starring Johnny Depp, also boasts the oldest item in the collection - an illustrated pamphlet of the Sweeney Todd tale which dates back to 1842. 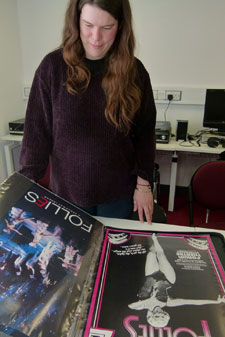 Along with Sweeney Todd, the musical Follies, one of Sondheim's biggest hits, is probably the best represented in the collection. The 1971 show, which won seven Tony awards, tells the story of the reunion of a group of performers from Weismann's Follies, a musical revue staged in the inter-war years. Amongst the keepsakes is a full-size reproduction of the original Winter Garden Theatre poster. Other items from the musical include a set of original posters from the 1987 West End production produced by Cameron Mackintosh.

"The Stephen Sondheim Society were keen to find a way to bring the material to a wider audience and give students and researchers of theatre history the chance to explore it," Kingston University archivist Katie Giles explained. With its growing collection of theatre annals, including the Sheridan Morley Theatre Collection and David Heneker Archive, the University was recommended as a potential home. "The project was obviously a labour of love for Mr Wood. Everything came to us in very good condition - carefully stored and catalogued, with its own numbering system," Mrs Giles said.

Sondheim had no trouble attracting big names to his shows. At the height of his fame, Frankie Howerd starred in the 1963 London premiere of A Funny Thing Happened On The Way To The Forum, one of the composer's best known works. The archive contains a photo signed by the well-loved funny man, alongside a newspaper photograph of him on stage.

Not all of Sondheim's musicals were instant hits. Merrily We Roll Along - a Maria Friedman directed version of which has just received rave reviews at London's Menier Chocolate Factory and is soon to transfer to the West End - did not find favour with the critics when it first opened on Broadway. Sondheim refined the show and in 1992 Ms Friedman starred as female lead Mary in a production at the Leicester Haymarket, hailed as a success. Photographs of the actress on stage, and of Sondheim himself standing outside the theatre, make up part of the ensemble, along with an original flyer from the musical. 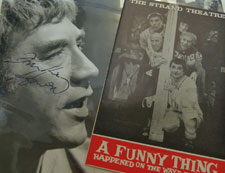 The collection also includes a huge poster from the 1990 Hollywood blockbuster Dick Tracy, adorned with the familiar comic-style figure of Warren Beatty's character, for which Sondheim wrote five tracks and won an Oscar for the song Sooner or Later.

Chairman of The Sondheim Society David Ovenden said the songwriter's work represented a significant high point in musical theatre, but stressed it was also important that he was recognised as part of a wider family of composers. "We're very keen that Stephen's work is seen in relation to his predecessors and successors," he said. "Kingston University's existing theatre archives, and the links it has with other collections, will help to place his work in context."

Altogether the archive, which will be housed and managed by Kingston University's Archives and Special Collections, includes more than 30 boxes and albums of material from 28 shows, as well as sound and video recordings and a small library of books. It will grow as the Society continues to collect material relating to Sondheim and his work.

Mr Sondheim himself was surprised at the amount of material accumulated and was very supportive of efforts to preserve the collection. "I am delighted that Kingston University has taken on the task of collating and conserving the considerable amount of material collected by The Stephen Sondheim Society and its members over many years," he said. "This work will ensure that the material will be available to academics, theatre practitioners and the public for study and research, and for just plain curiosity, for years to come."