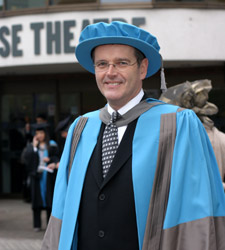 The Chairman of the British-American Business Council and Honorary Legal Advisor to the British Consul-General in Chicago has been recognised by Kingston University, in south west London, for his achievements in the field of law.

David Kay OBE, a graduate of Kingston Law School, took a trip down memory lane as he returned to the town for the first time in more than ten years to receive his award. He travelled from the United States with his wife for the ceremony at The Rose Theatre.

Called to the English Bar in 1979, Mr Kay received his U.S. law degree and was admitted to the bar of Illinois in 1990. He has lived and practiced law in England, Saudi Arabia, and the United Arab Emirates. He was born in Hertfordshire and now lives in Chicago where he is a partner in the Chicago office of the Philadelphia-based law firm Drinker Biddle & Reath LLP.

Mr Kay was made an Honorary Doctor of Laws at the ceremony on Monday 11th January. He thanked Kingston University for giving him the opportunity to gain a solid grounding from which to launch his career.

"I feel very fortunate to have gone to Kingston University so it's a very emotional day. This is the first time that I've been back to Kingston for more than a decade and it's brought back many memories of how I felt when I graduated. I have made the most of the opportunities that have come my way, but the basis of my successful career is a very good degree which Kingston University provided me with."

Alongside his role as Chairman of the British-American Business Council, which is the largest transatlantic business network, Mr Kay is also a founding member, director and chairman of the Chicago branch of the organisation. 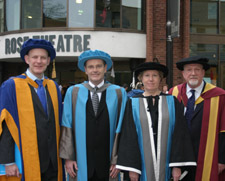 Professor Matthew Humphreys, Head of the School of Law at Kingston University, was delighted to welcome back such a distinguished alumni and hopes that Mr Kay's achievements will inspire students currently studying law at Kingston.

"We are delighted to recognise David's many achievements in the field of law; he has had a brilliant career, both here, and in the Middle East and America. He's an inspiration for our students and a great example of what they can achieve. David's success and his fantastic international connections are something we are keen to encourage our students to emulate."

In 2003 Mr Kay was awarded an OBE in the Queen's Birthday Honours List in recognition of his services to British business interests and the British Community in the United States. He has written on the legal and commercial aspects of investment and doing business in Europe and the Middle East and has published a book called 'Trading with America, A Practical Guide'.

Mr Kay was the first Honorary Graduate from the Faculty of Business and Law to receive his award at the University's new graduation venue, The Rose Theatre in Kingston.