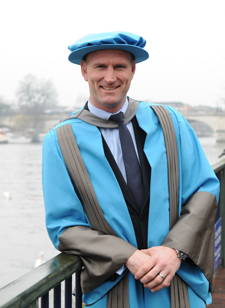 Former rugby international Lawrence Dallaglio has joined the illustrious line-up of Kingston University's honorary degree recipients. He was given the award in recognition of his contribution to sporting excellence and community development.

Capped 85 times for England, Dallaglio was a key member of the team that won the inaugural Sevens World Cup in 1993 and the 2003 Rugby World Cup. He also played on three British and Irish Lions tours, including 1997's victorious series in South Africa. Widely regarded as one of the greatest back row forwards of all time, he is one of only two Northern Hemisphere players to hold world cup winners' medals for both the sevens and 15-man game.

Now retired from competitive rugby after a career spanning almost two decades which saw him captain England twice, he now tirelessly for the Dallaglio Foundation which he founded after losing his mother, Eileen, to cancer in 2008.

Dallaglio has long-standing links with Kingston University having studied urban estate management in the 1990s. He initially juggled his passion for sport with study while playing for the London Wasps and England Under-21s. Speaking at a ceremony at Kingston's Rose Theatre, Dallaglio said he felt nervous to be standing in front of his fellow graduates - more so than on a match day. "I thought playing in front of a few thousand at Twickenham was hard work, but I definitely woke up before the ceremony feeling very nervous and very excited," he said. "What an incredibly proud and humbling moment this has been for all of us." 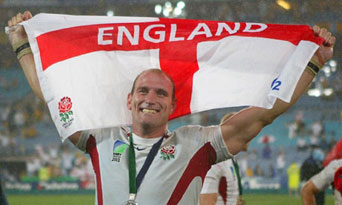 He recalled his time at Kingston Polytechnic, as it was then, as a happy period during which he lived on a house boat on Swan Island and occasionally played for the University rugby team. He even met his wife, Alice, at Kingston where she studied interior design in the same faculty at the Knights Park campus. "Everyone tells you that being young and growing up are the best days of your life - and of course they are right," he said. "But I've always believed that the best day of your life should be the next one and the one after that. No matter how good or bad a day is, we all have the ability to turn the next one in to an even better day. And that's something we should all reflect on," he told students graduating from the Faculty of Art, Design and Architecture.

Dallaglio said one of the greatest things he had learned in life was humility and teamwork. "Talent alone is simply not enough to be successful," he added. "Nothing in life is ever achieved on your own. You need the help and support of other people - there is nothing better than that feeling of collective success."

Reflecting on the 1990s when he was faced with two careers - rugby or surveying - Dallaglio said he didn't think that having two or even three careers was necessarily a bad thing. "What you set out to do in life may not ultimately be what you end up doing and there is nothing wrong with that," he told the graduating students. "The important thing is having that desire to re-train yourself, take some of the skills from your previous career and studies and accept the challenges that lie ahead for you." 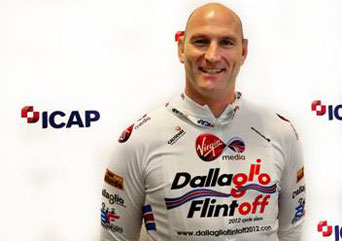 Since leaving professional sport in 2008, Dallaglio has channeled his energy in to charity work. The Dallaglio Foundation has raised millions of pounds to support cancer research and youth development projects. His marathon efforts have included a 1,750-mile bike ride to each stadium of the Six Nations Rugby Tournament and a similar length journey from Olympia in Greece to London in 2012, over some of Europe's most challenging mountain ranges. "That was the most physically demanding challenge I have done since retiring from professional sport," he said. So far his Cycle Slam project has raised more than £3 million. He was awarded an OBE in recognition of his services to rugby union and charity in 2008.

Dallaglio said family had always been very important to him and that his mother would have been very proud to see him receive his honorary degree. He encouraged the new graduates to continue setting their sights high in life and to strive to be the very best they could be. "My mother gave me an extraordinary belief throughout my life that if you shoot for the moon, you'll be amongst the stars," he added.

Head of the School of Surveying and Planning Professor Sarah Sayce said it was clear from Dallaglio's time at Kingston University that his talent was prodigious and his dedication to the game complete. His tireless fundraising, including cycling half way across Europe with cricketer Freddie Flintoff, had shown that determination and commitment in another guise, Professor Sayce said. "At Kingston University, we believe that education should be life changing. Above all, it is about helping people find what they can do and do well," she added. "Lawrence Dallaglio epitomises what Kingston stands for - courage, determination, talent, the power to succeed and, in doing so, acting as a force for good." 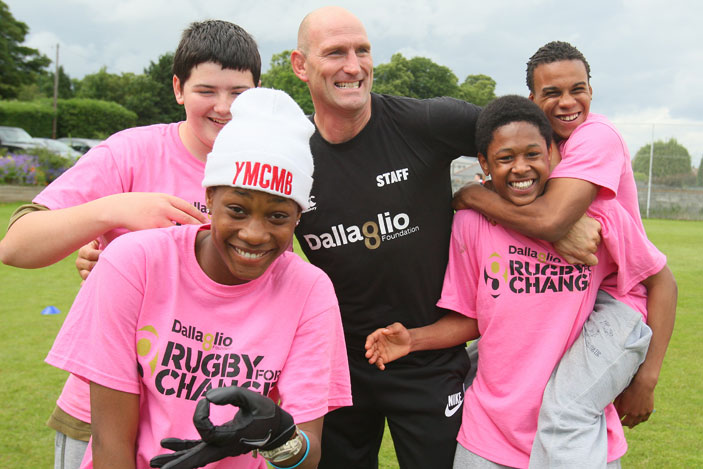