A note from the Vice-Chancellor 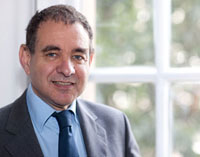 Kingston University has a new Chancellor! The Chancellor is the ceremonial head of the University and does not have any formal responsibility, but may confer awards at degree ceremonies and will often support the University in its fundraising endeavours.

We have been very fortunate to have Sir Peter Hall as our Chancellor. Sir Peter has been a source of support and wise advice, as well as the inspiration for the creation of the Rose Theatre. He has agreed to become the University Patron. Our new Chancellor is Bonnie Greer.

Bonnie was born in Chicago, where she studied theatre under David Mamet. She is an award-winning playwright and has written for the stage, radio, television and film, and has also published two novels and a biography. She played Joan of Arc on the Paris stage and performed her oratorio Greco/Davis at the London Jazz Festival. Besides all this she is passionate about the sciences saying: "When you think of all the big problems that are out there waiting to be solved, every ounce of human intelligence is needed. I think of myself as a kind of science onlooker; my second novel was about a scientist, and I love, for example, experimental physics – maybe even more than the arts."

Bonnie became a British citizen in 1997, was awarded an OBE in 2010 for her contribution to the arts, and was named one of the UK's Top 300 Public Intellectuals. She has just completed two terms as a trustee of the British Museum, and is also President of the Bronte Society. An editorial in the Kingston student newspaper The River described Bonnie as "the perfect Chancellor for Kingston". It is good to be able to agree wholeheartedly with The River! Bonnie has shown leadership in the arts, is passionate about the sciences and has made a public stand for the power of free speech and civilised argument; she stands for all the values that are important to Kingston University and is very keen to be involved and support us.

These values are exemplified by our alumni telephone fundraising campaigns. Last autumn's campaign raised more than £70,000, breaking the previous Spring 2012 campaign's record. Your support, especially in these straightened times is wonderful. The funds go towards our Student Hardship Fund, the Opportunities Fund which support student facing projects, postgraduate scholarships and the Research Fund.

The Spring 2013 campaign is underway now. Even if you can only afford to give a little, do spend some time talking with the students who ring. They learn a great deal from the experiences of the alumni that they speak with. We have some lovely anecdotes from the students about interesting things they have learned about the University, or tips about getting on once they graduate. The calls have even led to offers of internships.

And if speaking to a current student makes you nostalgic for your time at Kingston, there's further good news. From 2013 entry Kingston University alumni who have previously graduated from an undergraduate degree will receive a 10% discount on taught or research postgraduate degrees. We are looking into developing other benefits for alumni.

Finally, the University Board has recently agreed to a £6million pound investment in the University's IT network, which will improve speed, accessibility and resilience. This is the first step in a major rebuild of our network and software infrastructure and shows our ambition and confidence in building for the future. We also hope to have major building plans for the future agreed over the next few months and look forward to announcing them in the next KINGSTON magazine – watch this space…