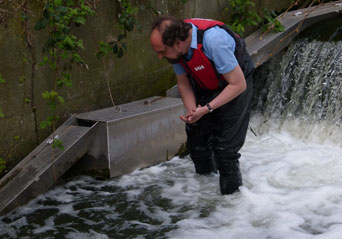 Volunteers at Kingston University will be on the look-out for critically endangered European eels this summer as they take part in the Zoological Society of London's (ZSL) annual monitoring programme.

The presence of eels in rivers that feed in to the Thames has been studied by ZSL since 2005 and the data is helping conservationists understand more about what factors might be causing their numbers to decline. Eel traps are set at 16 sites across London and volunteers at Kingston will be checking the Hogsmill River trap twice a week until September to see is any of the slippery creatures have made their way in to it.

"The number of young European eels joining the adult population has crashed since the 1980s," ZSL's Joe Pecorelli, who leads the citizen science eel monitoring programme and has been training volunteers at the University, explained. "The Thames catchment area has seen a 99 per cent drop and one of the big problems eels face is the loss of habitat due to obstacles such as weirs in rivers that block their movement upstream. This project is proving very helpful in identifying where the worst barriers are so that we can install special devices to help them pass. We are so grateful to Kingston University and all the volunteers for their help with the project." 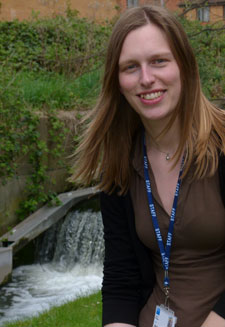 European eels spawn in the Sargasso Sea, which is in the North Atlantic Ocean, and take approximately a year to travel east toward the estuaries of Europe. They then spend anything between 15 and 20 years maturing in the rivers before making their way back to the Sargasso Sea to lay eggs at the end of their lives. When eels are mature, they turn silvery to help camouflage themselves against predators on their long return journey and are called silver eels. Their extraordinary migratory pattern was a mystery until the early 20th century.

Rachel Burgess, the biodiversity and landscape administrator at Kingston University and volunteer coordinator for this project, said she had been pleasantly surprised by the response from volunteers. "We've had staff, students and members of the public eager to take part in the programme," she said. "Eels have been listed as critically endangered since 2009 by the International Union for the Conservation of Nature and with our location here on the Thames, it was a perfect project for our Biodiversity volunteers to get involved with right on their doorstep."

Information assistant at Kingston University Richard Angliss is taking part in the monitoring programme for the third year. "Last year there was just one eel spotted in the trap on the Hogsmill River, but it is just as important to record a lack of eels as it is to note their presence," he explained. "We load the data on to the ZSL website and this is collated along with the other sites. We all met up at the end of the season at London Zoo to discuss the project which was great fun. It is good to take part and feel that you are contributing to an important environmental programme."

Picture below: Volunteers in training at the University's Knights Park Campus where the Hogsmill River winds its way towards the River Thames. 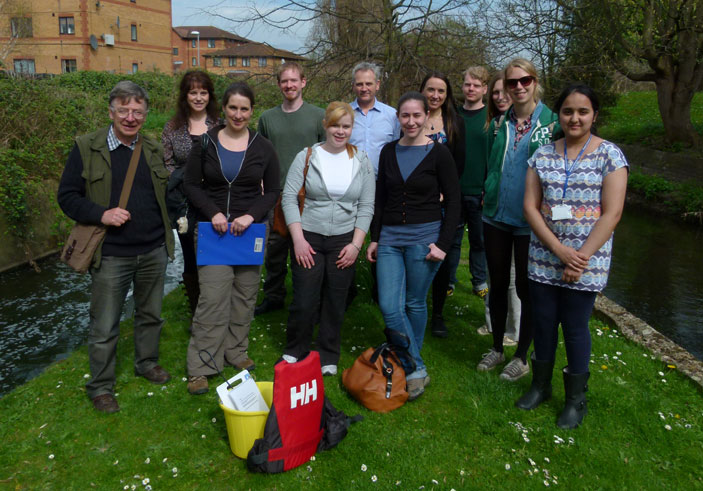