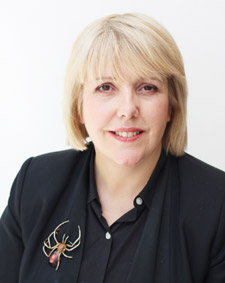 'Basics Fashion Design: Developing a Collection' is Elinor's first foray into the publishing world.  An expert in womenswear and childrenswear, she embarked on the project with her husband Colin Renfrew, who she met on the MA Fashion course at Saint Martin's, together combining more than 40 years of fashion experience.

"The industry experts and representatives from international brands who sponsor the Kingston course were extremely generous with their time as the book took shape," Elinor said.  They included top designers Giles Deacon, whose illustrations feature on the book's cover, and Richard Nicoll, both of whom have previously been named Designer of the Year at the British Fashion Awards.  Milliner Stephen Jones, accessory designer Bill Amberg and shoe designer Nicholas Kirkwood were among the many other contributors.

Kingston staff and students both feature in the book.  Work highlighted includes new menswear knitwear label Sibling set up by senior lecturer Joe Bates and colleague Andrew Ibi's award-winning shop The Convenience Store.  High-achieving Kingston graduates Sophie Hulme, who now sells her label in to Whistles and Asos, and Peter Perrett, whose menswear designs are stocked at b Store also have examples of their work in the book. 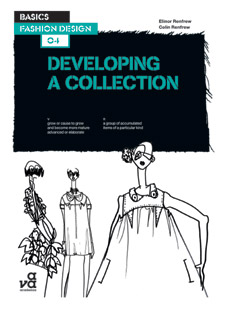 Produced by AVA Publishing and distributed by Thames & Hudson and Ingram Publisher Services, the book is the fourth in a specialist series on fashion.  Currently being translated into Portuguese, Chinese and German, it will be distributed worldwide.  The title has already set a new record for its publisher for the number of advance copies ordered in the United Kingdom.  "We wrote the book to fill what we perceived to be a gap in the market for a contemporary textbook.  Creating a collection is often a defining moment for fashion students and this fully-illustrated reference book should help them navigate through this challenging process," Elinor explained.

As part of the process of putting the book together, Elinor and Colin accessed the costume archive at the London College of Fashion where Colin is Dean of the School of Design and Technology.  "Researching the historical aspects for the book from haute couture to high street was one of the most enjoyable parts of the process for me," Elinor said.  "Editing, however, was the most difficult.  We were both so deeply involved in the content, it was often necessary to make compromises about how much we could include," she said.

Working together had proved a rewarding experience for the couple, although Elinor quipped it had also been a little difficult at times.  "We both were new to publishing and had so much to bring to the process," she said.  The challenge has inspired her to give a talk on the experience called 'How to Write a Book and Stay Married' which will be part of a series of research talks in the Faculty of Art, Design and Architecture later this year.

Elinor is planning an official launch for her book in the spring.