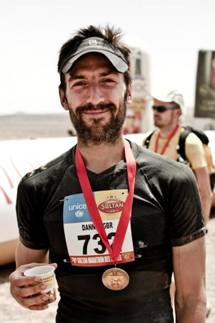 Competitors at the annual Marathon des Sables (MDS) made the most of the facilities at Kingston University in the run up to the arduous five day event. Labelled the ‘toughest foot race on earth', it consists of marathons and double marathons across the Sahara Desert in temperatures in excess of 50degC.

Each year the Sport and Exercise Sciences department works with runners to help them prepare and adjust to the extreme temperatures they will encounter in the desert by using Kingston University's specially designed environmental heat chamber. This year Danny Kendall, who has completed the marathon four times, trained in the chamber. "As an athlete competing in such a gruelling event, you try to prepare as best as possible and I found the time training in a heat chamber invaluable to my preparation," he said. 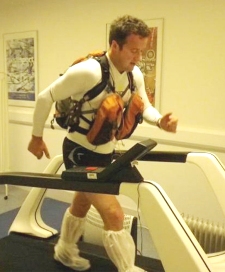 "I went out for a ‘hot' holiday three weeks out from the race and ran 20 miles a day for nine days in the heat of the day. It was ideal preparation. When I returned to the United Kingdom it was important not to loose the adaptation I had achieved so I maintained some heat training in the Kingston University heat chamber by running on a treadmill. As a result, I never found the heat a real issue in the race."

Danny set his sights on a top 10 position and the top British performance of all time, bettering the 12th position set by James Cracknell in 2010. He achieved his goal by finishing 10th overall.

"We'd like to congratulate Danny and athletes Simon Maisey, Steve Drake and Craig Dixon, who also trained with us at Kingston, on their fantastic achievements," Chris Howe, physiology laboratory technician at the University's Faculty of Science, Engineering and Computing, said. "We wish them the best of luck for their future challenges."