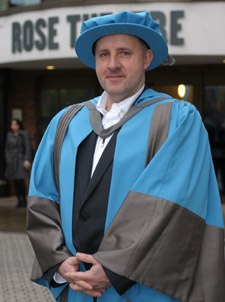 The technology expert who helped develop Google's Street View photo maps has been named an Honorary Doctor of Science by Kingston University in South West London. Kingston graduate and former lecturer at the University Ed Parsons, who was also responsible for introducing the Blackberry to the UK Government, returned to his alma mater to receive the award.

Mr Parsons has spent more than 20 years working in the world of geographical information systems (GIS), both in universities and in industry with companies such as Google and Ordnance Survey. He said he was proud to receive an honorary degree from Kingston University, particularly since it had been so influential in making advances in GIS. "It's also very special to receive the honorary degree because I've had really strong connections with Kingston University since my own days studying there and because I've also been a member of staff there," Mr Parsons, who lives in Teddington, South West London, said.

Acknowledging that students faced a tough time launching their careers in the current economic climate, he said: "Scarcity breeds creativity and it is that creativity which will lead to the next big developments in GIS. Today's graduates have an innate curiosity and my advice to them is to carry on asking questions and have the confidence to go out there and really challenge what happens in the world around them."

Graduating in 1987 with a degree in geography from the University's predecessor Kingston Polytechnic, he returned as a lecturer in the emerging field of GIS four years later. Mr Parsons was part of the Kingston team that helped to establish the world's first undergraduate degree in Geographical Information Systems, which was launched in 1989. He created the first online map of general election results in 1997, as well as developing short courses and seminars for industry and the public sector.

After six years at Kingston, he joined Autodesk Inc, then the world's fourth largest PC software company and, in 2001, was appointed Chief Technology Officer for Ordnance Survey - the first such post in the 200-year history of Britain's national mapping agency. He went on to become Director of IT and, as the organisation's youngest director, managed a department with 250 staff, a budget of £20 million a year and a 40-strong research and development team. 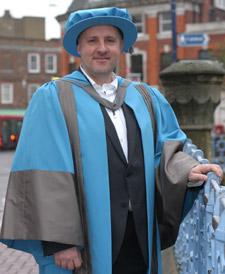 In 2006, Mr Parsons set up his own company, Open Geomatics and, since 2007, he has been Google's GeoSpatial Technologist, which includes developing and promoting products such as Google Maps, Google Map Maker and Street View.

Professor Nigel Walford, from the School of Earth Sciences and Geography, said Mr Parsons was a true Kingston University success story and had done much to strengthen ties between industry and universities. He added that he had been an enthusiastic lecturer at Kingston who had inspired many graduates to work in GIS. "Kingston is proud to have played a part in fostering Ed's enthusiasm for the geospatial world and has special cause to honour him for his contribution to the advancement of GIS as it becomes ever more central to our lives," Professor Walford said.