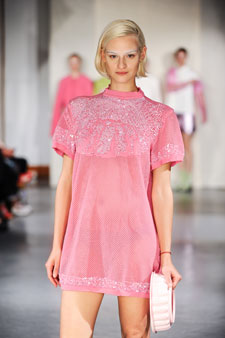 Jelly, the legendary foodstuff of children's parties and ice-cream's partner in crime, has become the vital ingredient in a Kingston University student's latest fashion collection.

Krista Hendriksen's love affair with the fruity dessert started during a wander around Greenwich market with her Nan and Grandad. The 21 year old from Warwick spotted an old, pink jelly mould amongst some bric-a-brac. Fascinated by its retro shape she began to explore whether the undulating grooves and scalloped edges could be transferred to fabric.

"I started to play with the shape of the jelly mould in my sketch book, scaling it up and down to see what type of garments it might lend itself to," the young designer explained. "I also played around with using jelly motifs as a print."

Krista's grandfather Nick was thrilled with her interest and began regaling her with stories of the gelatine factory that used to dominate the skyline of her hometown. His sister, Krista's great aunt, used to work in the George Nelson, Dale and Co. factory at Emscote Mills. It was opened by chemistry graduate George Nelson and his brother-in-law Thomas Dale in 1841. The firm produced gelatine for both edible and pharmaceutical products and was the one of the first manufacturers in Warwick.

Krista said her grandfather had vivid memories of the factory and clearly remembered the pungent smell of Nelson's Gelatine bubbling away as he made his way to work each day. "Discovering jelly played such a significant part in the history of where I grew up made me even more keen to incorporate it in my collection," Krista said. "I always try to find a personal connection with my work so it's been really exciting to find out from Grandad all about the role the gelatine factory played in our family life."

The bold lime greens and sherbet pinks of Krista's womenswear collection instantly conjure up images of the childhood dessert. From a lampshade-like jelly mould skirt made from stiff pink felt to a green jumper incorporating transparent yarn to replicate the grooves of a jelly, the garments are vibrant and striking. Her glittery white and pink shirt made from cotton and neoprene has scalloped edges at the back, emulating the jelly mould, while her pink neoprene shorts are covered in scalloped frills all over the bottom. 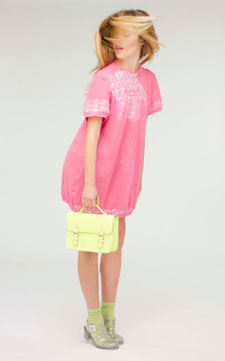 The young designer, who has specialised in knitwear for most of her degree, has even made a bubblegum pink short shift dress which she is painstakingly covering in matt pink sequins - a nod towards jelly's opaque cousin blancmange. "I bought 40,000 sequins and I think I'm probably going to need more by the time I've finished," Krista said. "The dress is going to be completely covered, apart from a jelly emblem on the front. Even my Mum and Nan have been lending a hand, staying up late to help me hand sew the sparkly discs on to it."

It could be said Krista was destined to incorporate sparkles into her collection after a spending three months working in San Francisco with the girlswear team at American designers Old Navy. "Everything was sequins, shimmers and beads - they called it gloop," the young designer said. "It was so much fun, I absolutely loved every minute of it. You have real freedom to be creative and colourful in children's clothing."

To finish off her outfits Krista has created pink jelly mould hats from vacuum formed plastic. And for the feet - what else but jelly shoes?

Principal lecturer in fashion Sam Elliott said Krista's womenswear range embraced the off-beat nature of her illustrative design style. "Krista has used innovative pattern cutting and fabrics like neoprene and transparent wool to mimic the surfaces and shapes of jellies," she said. "She's created a range of youthful clothes which are a delicate blend of quirkiness and sophistication."

Although Krista's collection contains pieces that could be described as larger than life, she says her focus is very much on commercial design. "I do have some statement pieces, but I think they are garments people would wear," the final year BA Fashion student said. "Ultimately though, I love commercial womenswear design and that's where I'd like to find a job once I've finished my degree."