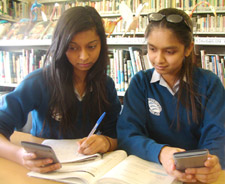 Teenage pupils are getting some extra tuition at a series of mathematics masterclasses organised for the Royal Institution by Kingston University.

Around sixty Year 9 students from local schools will be attending the classes, which aim to enthuse and excite young people about mathematics. The classes are being held on Saturdays at Kingston University, giving the pupils a taste of life at a higher education institution.

The Fibonacci sequence - where the numbers are the sum of the previous two, half-life - a description of gradual decay, and the mathematics of navigation are among the topics covered in the six week programme, which ends on 13 March.

On Saturday (February 6), 20 Kingston University students studying for the postgraduate certificate in education took the young maths whizzes through their paces. Two postgraduate students supervised groups of six pupils who worked in teams to solve maths problems and compete for a prize.

Kingston University lecturer Mark Humble, who organised the classes, said: "In the two classes we held in January, pupils were sitting down being taught. Saturday's class was much more active - the children had to draw on the skills they've learned from maths classes at school to solve mathematical problems."

As a tutor for scientific charity the Royal Institution, Mr Humble was asked to organise a series of masterclasses for the first time last year. The programme was so successful that he was asked to establish another set of lectures this year.

Priya Patel, 13, and Monica Gupta,  14, both from Tiffin Girls' School have been attending the sessions and said they had made them realise how enjoyable maths could be. "Working with the postgraduate students was particularly fun," Priya said. "They really knew what they were talking about and it was brilliant to have a chance to delve deeper into problem solving and subjects like games programming which we wouldn't be able to do at school."

Having the opportunity to meet and share ideas on problem solving with like-minded students from other schools was also really positive, Monica said. "We got to do some role-playing with the Kingston University teaching students and we've been able to study things like latitude and longitude, not just calculations," she added. "What we are learning will be very relevant to maths at degree level and I think will really encourage those of us taking part to consider going on to university."

There is a two week half-term break from classes before the final three sessions resume on February 27.

Find out more about postgraduate courses in Education at Kingston University.