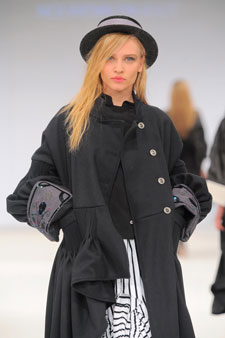 Industry plaudits have been flying after the cream of Kingston University's BA(Hons) Fashion class of 2013 unveiled their latest collections at one of the biggest events on the capital's catwalk calendar. They showcased an array of menswear, womenswear and knitwear to some of the top names in the business during Graduate Fashion Week, earning praise from pundits who billed the Kingston University Show a  highlight of the annual extravaganza.

The 24 Kingston students selected to display their latest work to a host of influential industry experts included French fashionista Nolwenn Faligot, whose striking womenswear was inspired by her native Brittany. The 21 year old experimented with traditional smocking and embroidery, combining the techniques with more modern approaches including laser cutting to create a lace-like material. 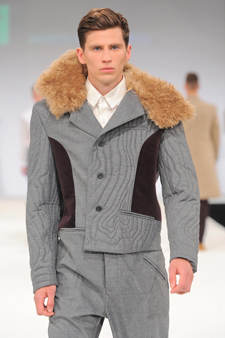 Nolwenn, who interned with leading designer Hiroko Koshino in Japan last summer, drew heavily on her heritage - making strong use of the classic Breton stripe throughout her six looks which featured fabrics as diverse as light silk and heavy wool.

Fellow student Cypriot-born Marios Alexandrou also produced a collection with strong links to his homeland. The talented 24 year old recreated the bold contour lines of a disused copper mine, where his late grandfather Andreas Flaounas worked, in intricate stitching which was a key feature of his menswear. Deep reds, beige and greys dominated the looks Marios created from fine cottons, soft corduroys and moleskin. 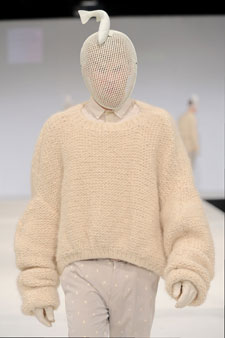 Laura Teasdale, from Balham in London, also used her grandfather, John Clarke, as the muse for her collection. Youthful photographs, including one of Mr Clarke doing a handstand on a beach in the 1960s, prompted her to produce some tongue-in-cheek tailoring from classic men's fabrics including wools and leather. Eye-catching mesh masks adorned with a fish motif inspired by Dutch graphic artist M C Escher and created alongside acclaimed milliner Keely Hunter, completed each of her six menswear looks. 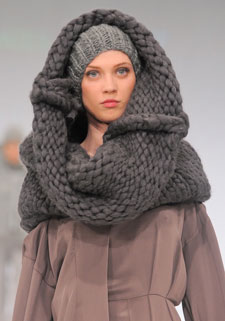 The fusion of family and fashion continued in Anna Yates-Housley's womenswear. The 23 year old from York produced six looks, including towering snoods and balaclavas that obscured the face, slick shiny leggings and a silk jacket, layering shades of grey, black and plum. Her work was heavily influenced by 1990s model Eve Salvail, famous for her shaved head and the dragon tattoo on her scalp.

"I really wanted to make a statement about strong women," Anna explained. "My Nan, Catherine Yates, who has been unwell recently, has made me even more aware of how resolute and courageous everyday women really are and I wanted my collection to reflect that theme."