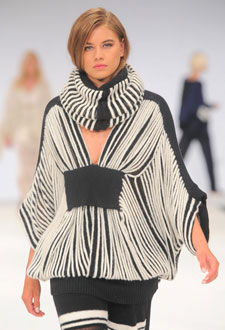 She's long been regarded as one of the legendary designers of the British fashion world. Now style icon Zandra Rhodes has been responsible for inspiring a tribal-themed Kingston University collection that took Graduate Fashion Week by storm.

Keen artist and BA (Hons) Fashion student Lucinda Popp, from Kempsford near Cirencester, was named runner-up in the Stuart Peters Visionary Knitwear Award for her striking range of sophisticated womenswear in black, white and a deep heather hue. She created the collection using only the pencil strokes in her sketchpad as patterns. The oversized jumpers, trousers and slim floor length skirts covered in three-dimensional stripes are fashioned from mohair, cashwool and a synthetic fur-like yarn.

"I've always been fascinated by Zandra Rhodes' bold textile designs and I first visited her studios in Bermondsey in London when I was 16. She was really lovely, she even invited my Mum and Dad in to have a look around," the 22 year old Kingston student said. "I kept in contact with her and managed to arrange the first of two work placements with her just before I came to Kingston. She's an amazing artist, which is something I really admire as I love drawing. She has an archive of sketchbooks from when she was at school which she let me look at - they're exquisite," Lucinda, who was also runner-up in this year's Graduate Fashion Week Karen Millen portfolio award, said.

During the second year of her degree, Lucinda did another stint in the Bermondsey studios. Impressed with her sketches, Ms Rhodes said she would be keen to see Lucinda's take on African tribal cultures. The designer set Lucinda the challenge of reinterpreting her own famous vintage print collections, with the project sparking an interest in African art and culture that Lucinda carried forward to her final collection. 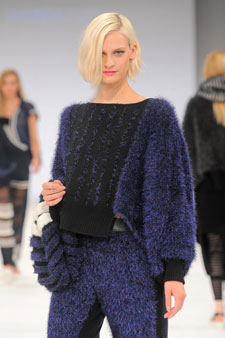 The brief saw Lucinda pursue her love of visiting art galleries in the name of research. Armed with pencil and pad, she visited the British Museum and was even lucky enough to see the African Exhibition at the Metropolitan Museum of Art in New York while on a placement with leading label Banana Republic last year.

"I used the exhibits as starting points and began to reinvent them through my sketches," Lucinda explained. "I then turned the lines in my pad into knit." By Lucinda's own admission, her process of producing garments is unusual. She works very freely, unconstrained by strict patterns, knitting rectangles then letting their exact size and shape evolve before sewing them together. "It's quite an organic way to work - it means no one is ever sure what my pieces are going to look like until they're finished," Lucinda said. "My tutors at Kingston have shown enormous faith in me and they've been really supportive of this slightly unorthodox approach."

The looks Lucinda will reveal on the Graduate Fashion Week catwalk on 4 June capture the bold lines of a tribal mask. A black oversized jumper and matching trousers are covered in knitted white vertical and horizontal lines. Trouser suits knitted from a synthetic yarn that creates a fur-like fabric seem to buzz with the energy and movement of a tribal dance and a white, draped jumper and long pencil skirt create a fluid and sophisticated silhouette.

Lucinda's unconventional approach to knitwear seems to have stood her in good stead for her future career. She has been offered positions at both Abercrombie and Fitch and Banana Republic, but has instead decided to hone her craft a little more before she commits to a job. She has won a place to study knitwear at the Royal College of Art when she completes her degree at Kingston University.

Kingston University senior fashion lecturer Sam Elliott said Lucinda had developed her own technique for creating a collection. "She makes excellent uses of the varied weights of her yarns to develop the silhouettes of her garments, incorporating shapes of the body to create a sophisticated style," Ms Elliott said. "Each element of her pieces is dependent on the other, making it a very organic process." 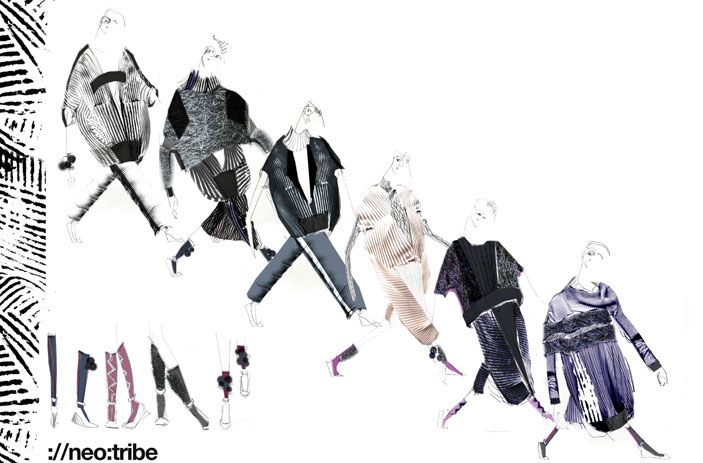