Space Electronic: Then and Now. Discos, architecture and the avant-garde

Discos are the stuff of our youth, of late nights and letting loose in our leisure time. They're surely not the subject of scholarly study...or are they? Kingston University's Dr Catharine Rossi suggests that we should be taking discos more seriously. This is what Space Electronic: Then and Now is about: a research project that explores the meanings of discos, architecture and avant-gardes past and present. 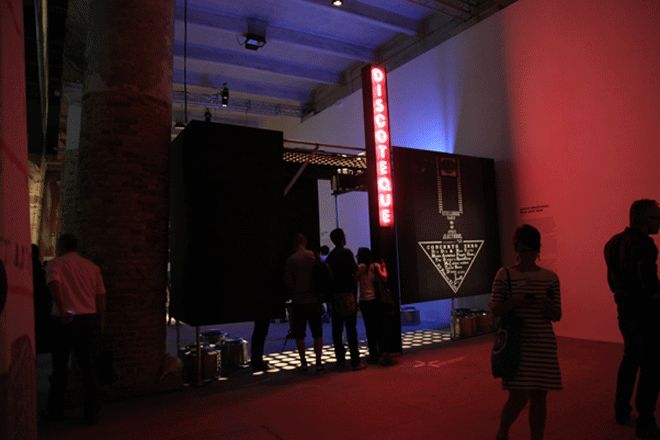 Dr Rossi is a design historian based in the School of Art and Design History in the Faculty of Art, Design and Architecture. Her research interests include post-war Italian design and architecture, in particular the exploration of narratives omitted in this celebrated and influential period. This has informed several publications, most notably 2013's The Italian Avant-Garde: 1968-76, co-edited with Professor Alex Coles of the University of Huddersfield for Sternberg Press. The focus of the book was Radical Design, the Italian 1960s and 1970s avant-garde that sought to overturn design and architecture's market, modernist orientations in favour of their use as utopian tools for societal change.

Critically acclaimed in the international press, The Italian Avant-Garde saw Rossi commissioned to curate an installation at the 2014 Venice Architecture Biennale. The world's largest architecture event, the 14th edition was directed by the renowned Dutch architect Rem Koolhaas. Specifically, Rossi was invited to contribute to Monditalia, one of the three main exhibition spaces at the 2014 Biennale, and which was devoted to presenting architecture stories that could explore an aspect of the current state of Italy.

A forgotten radical past

Rossi knew she had a good story to tell. In 1969 a disco called Space Electronic opened in Florence. Behind it was Gruppo 9999, a collective of four young architects – Giorgio Birelli, Carlo Caldini, Fabrizio Fiumi and Paolo Galli. Together with their friend Mario Bolognesi, this lesser known of the Radical collectives created one of the movement's most important spaces: in the late 60s and early 70s Space Electronic was a hotbed of multimedia international experimentation in architecture, live music, theatre and technology.

Space Electronic isn't just fascinating for its forgotten past. As a conversation with Caldini, who contributed a chapter on the disco to The Italian Avant-Garde revealed, the disco is still going today, only now its radicalism has been replaced by a more commercial vibe and its earlier history forgotten. Drawing on primary research material, including oral histories, Gruppo 9999 drawings, footage and photographs of the club in the 1970s and today, the installation reimagined the disco to bring to light this little-known Radical episode and raise questions about the movement's legacy and relevance today, and also explore the meaning of discos as spaces for leisure and liberation past and present.

This was a highly collaborative project. The installation was designed by Ben Kelly and his eponymous design studio. Kelly is not only a Research Fellow in The Design School at Kingston University; he was also responsible for the interior design of the legendary Manchester Haçienda nightclub in the early 1980s. Fabrication and installation was overseen by Jack Neville, a BA (Hons) Product and Furniture Design graduate. In order to evoke the multimedia experience of the nightclub, Rossi worked with the artist Gilly Booth to create a short film to be shown inside the installation, with a soundtrack commissioned from another Kingston graduate, Mike Silver. The project was realised with the collaboration of Dr Fiona Fisher, the Modern Interiors and Visuals and Material Culture Research Centres and assistance of colleagues and workshops in the Faculty of Art Design and Architecture and Science, Engineering and Computing. External funding was received from the Biennale, the Association for the Study of Modern Italy and Space Electronic. Rossi also created a website to record and publicly disseminate research conducted for the project.

Following the Biennale's opening in June 2014, Space Electronic was featured in the Italian media and Rossi was invited to take part in a number of international public initiatives. At the Biennale this included Notte italiana, a "Weekend Special" event organised by Zero (the Italian equivalent of the magazine Time Out). As part of the magazine's ongoing project on Italy's nightlife, Rossi joined a panel that examined the close relationship between Radical Architecture and discos. On the magazine's notteitaliana website, Rossi contributed an Italian-language article, was interviewed, and featured in a Biennale-produced video.

Back in London, Rossi was invited to be a panellist on Whatever Happened to the Avant-Garde?, a session organised for Critical Subjects Architecture and Design Summer School 2014. Held at architectural studios across London, the School was convened by Alastair Donald, project director for the British Pavilion for Venice Architecture Biennale 2014.

In September 2014 the installation's film was included in the inaugural AND Film Festival, held as part of the 2014 London Design Festival. Space Electronic: Then and Now was on view to the public at MOSA, a Dutch ceramics showroom in Clerkenwell, with regular screenings and a launch night featuring talks by Booth and Kelly.

Space Electronic: Then and Now brought a largely forgotten story in architecture and design history to an international audience: the 2014 Venice Architecture Biennale attracted over 240,000 visitors from all over the world. Its closure in November 2014 did not signal the end of Rossi's research in this area, or interest in it. In addition to publishing an article on Space Electronic in AA Files (issue 69), Rossi has been interviewed for a film being made on another Gruppo 9999 architect – Fabrizio Fiumi – by his daughter, the New York-based filmmaker Elettra Fiumi. Rossi is also currently collaborating on a project with BA (Hons) Interior Design students at Kingston University, led by course leader Greg Epps, to explore re-imagining this site-specific installation in a new setting.  Most recently, Rossi has started collaborating on a new exhibition on the relationship between the Radicals and discotheques in 1970s Italy, set to open in London later in 2015.

Space Electronic: Then and Now is very much an ongoing research project, and Rossi invites those interested in talking about discos, architecture and avant-gardes to get in touch.

Find out more about Dr Rossi on her staff profile page.