Optical research and the effective treatment of cataracts

Research on the structure of the eye's lens is leading to significant improvements in the treatment of cataracts.

Professor Barbara Pierscionek and her team have discovered that the optical structure may be very different from what was initially thought. Rather than being smooth, as had previously been assumed, the eye lens' gradient of density appears to be stepped and may develop rather like the rings in a tree trunk. This is due to the way proteins are distributed in the lens. This new insight into the way the eye grows may lead to major improvements in synthetic lenses used in surgery to treat patients who have developed cataracts.

Cataracts can occur at any age, but the most common cataracts develop with age. In the United Kingdom, an estimated one in three people over the age of 65 is affected. Smoking and Ultraviolet (UV) radiation are thought to be causes and cataracts can also occur in people with diseases such as diabetes. The condition may gradually make vision more blurred and make it difficult to see in poor light. Treatment usually involves replacing the affected lens with an artificial one.

Artificial replacements do not currently match the quality of real biological lenses. Professor Pierscionek's research aims to develop improved implants with better optics and with the ability to change focus to give patients vision that more closely mimics the natural eye.

The eye's lens fine-tunes its focussing to adjust for distance

Professor Pierscionek carried out much of her 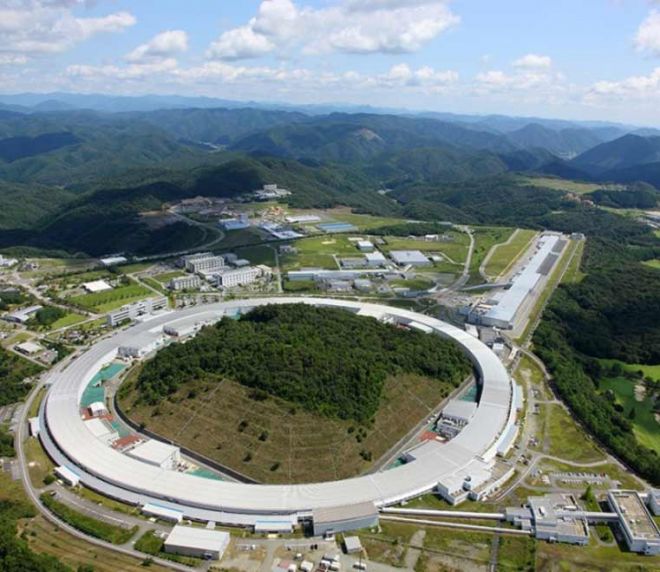 most recent research at Japan's SPring-8 synchrotron facility, one of the most powerful experimental X-ray sources in the world. These X-rays can penetrate parts of the body and soft tissue better than other forms of radiation, allowing engineers and scientists to look deeply into anything from metal to bacteria. When taking measurements it is important to keep the sample as close as possible to its natural state. The synchrotron is so sophisticated that it allows lenses to be measured while they are still in the eyeball.

Further analysis is now being carried out in laboratories at Kingston University by Professor Pierscionek and Dr Mehdi Bahrami, using ray tracing and mathematical modelling. The work involves projecting lasers of different colours through different parts of the lens to trace their paths. The information will then be used to help develop lenses with improved optical quality.

Professor Pierscionek, the Associate Dean of Research and Enterprise at Kingston's Faculty of Science, Engineering and Computing, has devoted two decades to researching the eye's lens. Her work has explored its biochemical, optical and mechanical properties. Since the lens is one of the few organs in the body that does not replenish itself, it is a model for ageing. As Professor Pierscionek concludes, "The lens has the capacity to reveal what has happened to a person throughout their life and to tell us about their disease state. The lens is the key to a lot of things – my research aims to unlock its full potential."

This research has been conducted in collaboration with scientists from the SPring-8 facility and Cardiff University. It is being funded by eye research charity Fight for Sight as well as grants from SPring-8, which has provided use of the synchrotron