Osteoarthritis is a painful and often debilitating disease that affects people's physical, mental and emotional wellbeing and quality of life. Around nine million people suffer from osteoarthritis in the UK, leading to two million GP consultations and 130,000 knee or hip replacements each year. This translates to 31 million lost working days and 1.5% domestic GDP loss. It is estimated that 17 million people in the UK will be living with osteoarthritis by 2030. With life expectancy increasing for most people, osteoarthritis is projected to have profound personal and socioeconomic effects and needs timely interventions to manage pain and reduce costs.

The programme is called ESCAPE-pain (Enabling Self-Management and Coping of Arthritic Pain through Exercise). 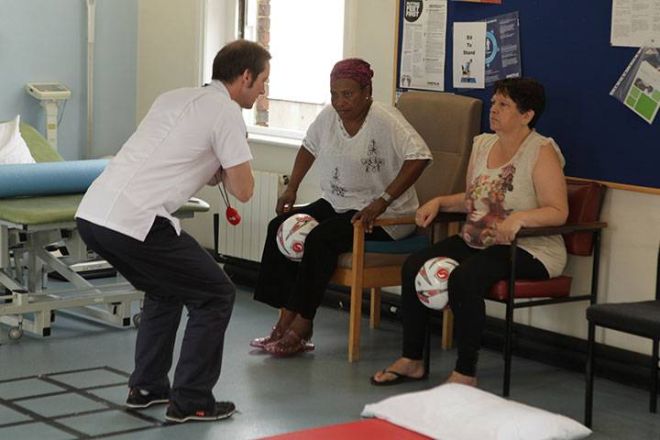 It was initially developed by Professor Hurley at King's College London. Since he joined Kingston in 2010, he has upgraded its framework to extend its applications to non-clinical settings, in collaboration with Kingston's former Professor of Health and Social Care Policy, Annette Boaz.

The ESCAPE-pain programme involves discussions and circuit sessions delivered to small patient groups through twice-weekly classes over a period of six weeks, supervised by physiotherapists and led by facilitators. The programme has been implemented across 294 venues in the UK, including healthcare centres and community and leisure venues, with the help of over 1,300 trained facilitators, more than 820 physiotherapists and over 480 exercise professionals. The programme is particularly encouraged by the Health Innovation Network to better handle pain in older people, given the dearth of healthcare infrastructure.

Of the 19,000 beneficiaries of the programme, most report that ESCAPE-pain has appreciably reduced pain, improved mobility, physical and mental wellbeing and quality of life. The programme also reduces the frequency of healthcare consultations, investigations and interventions, and is effective in the long term, lasting for up to two and a half years. Furthermore, ESCAPE-pain reduces social care and healthcare costs by about £1,500 per participant. ESCAPE-pain is one of four musculoskeletal interventions with a positive return on investment, particularly for the leisure centres where it is implemented.

ESCAPE-pain is widely considered a forerunner of evidence-based practice in physiotherapy and the wider allied health community.

It has been recognised as UKActive's Specialist Training Programme of 2019 and granted Best Practice awards by the British Society of Rheumatology (2016) and the Royal Society of Public Health (2015). In 2020, it was recognised as the Health Service Journal Musculoskeletal Care Initiative of the Year. The NHS-funded Academic Health Science Networks and the Innovation Accelerator has adopted ESCAPE-pain for national rollout. The ESCAPE-pain smartphone application and online programme developed by the researchers have been recommended for national implementation in the 2019 NHS Long Term Plan and have proved particularly beneficial in the wake of COVID-19 lockdowns. Healthcare providers in Spain, Greece, Argentina, Portugal, Cyprus and Bermuda are seeking advice from Professor Hurley regarding the training of their physiotherapists to deliver ESCAPE-pain to their domestic population.

The success of ESCAPE-pain is best captured in the observations of the National Institute for Health and Care Excellence (NICE)'s Quality Innovation Productivity and Prevention (2013) report: "Evidence for the feasibility, ease of implementation, and sustainability of the programme is shown by the sustained implementation of the programme, its geographical spread, and continued engagement between clinicians, patients, and the research team".