Pianist to hit a new high note in performance career

Pianist to hit a new high note in performance career 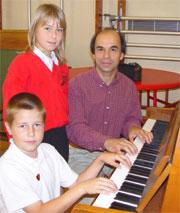 World-renowned American pianist Robert Taub is getting set to create a stir in Kingston music circles. The performer, widely regarded as one of the leaders in a new generation of virtuoso pianists, will shortly launch a project in which he will play all 32 of Beethoven's sonatas in Britain during the next four years. The series gets under way on December 7. All the concerts, featuring many of the composer's finest works, will take place in the Henry VIII State Apartments at Hampton Court Palace.

Appointed a Visiting Professor of Music Performance at Kingston University last year, Taub has become a regular traveller to the United Kingdom. His recent trips to London included a visit early last month to perform at Kingston Grammar School as part of the Borough's Arts Festival. Taub's hectic schedule also included a session at the University's School of Music, where he shared some of the tips picked up during his glittering concert career, and a visit to the Mount Primary School in New Malden to conduct a mini masterclass.

University Events and Alumni Manager Helen Trott applauded Taub's dedication to spreading the music message in Kingston. "Despite the fact he is based in New York and concert organisers around the globe are constantly clamouring for him to perform at their venues, Robert has thrown himself into his role as Visiting Professor with amazing enthusiasm," she said.