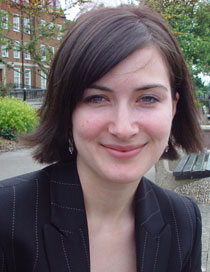 Using her initiative has landed a politics graduate from Kingston University a plum job with a Member
of Parliament. Angela Budd, 23, is personal assistant to Ed Davey, the Liberal Democrat representative for Kingston and Surbiton.

She found herself working for the MP after writing to his office in the hope that there might be a vacancy for a parliamentary researcher. â€œI only contacted him on the off-chance that there might be something available,â€ Angela said. â€œTo my surprise, I got a personal reply from Mr Davey and was offered voluntary work in the constituency because I had the advantage of knowing the area.â€

Before long she had become Mr Daveyâ€™s personal assistant and now combines the post with research work. Angelaâ€™s duties include keeping the MPâ€™s busy diary up to date and arranging meetings at his twice weekly surgeries. Along the way, she has become something of an expert on topics as diverse as planning disputes and concerns about fluoride being added to drinking water.

Angela is already planning her part in Mr Daveyâ€™s campaign to keep his seat in the next election. After that she has plans for a political career of her own. Her ambition is to become a local government consultant and she might even stand for election as a borough councillor.