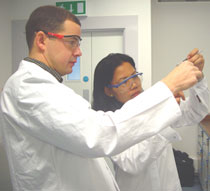 A loyal servant of the Royal Army Medical Corps and recruitment entrepreneur is proving that life really does begin at 40 after signing up to the Foundation Year in Medicine. Simon Holt left school at the age of 15 with no qualifications and after four years of factory work joined the armed forces. His six years with the Royal Army Medical Corps lit a flame of interest in medicine that would flicker in him for the next 20 years.

Having left the army in 1989, Simon was recalled for emergency service in the Gulf 12 months later. It was his experience serving as a paramedic for a mobile field hospital that confirmed his desire to become a doctor. â€œMy previous medical experience made me think I had the ability, and I knew I had the drive, but I didnâ€™t have the right qualifications,â€ he said. "It was a real source of frustration for me.â€

On his return from the Gulf, Simon undertook Kingstonâ€™s Foundation Access to Science course. In 1992, still unable to keep away from healthcare, he began working as a consultant for a medical recruitment agency. He also kept his practical skills up to date by becoming a part-time mental health carer. Five years later, Simon set up his own medical recruitment company which now boasts a staggering annual turnover of Â£12 million.

Despite having built up an impressive career profile, the pull towards medicine was still strong. A medical student that Simon had met through his company suggested it might not be too late for him to study medicine and encouraged him to look around for suitable courses. When he came across the Foundation Year in Medicine programme, Simon immediately phoned the university for details and was later welcomed on to the course.
â€œTraining to become a doctor is what I really want to do with my life and Iâ€™m just grateful to be given this opportunity,â€ he said.