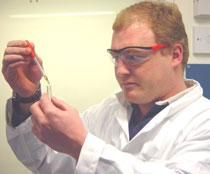 After joining the armed forces
when he was 18, Jaimie Taylor soon developed a desire for saving lives. Jaimie originally trained as a parachute regiment soldier before swiftly climbing through the ranks to captain. But it was his time
as a combat medic administering emergency aid to his colleagues on the frontline that was his most cherished memory on leaving the army five years ago.

Back on Civvy Street, the skills he had acquired in the forces were put to good use in very different fields. Jaimie became a bookseller and also moved abroad, taking on the role of director of a company chartering yachts in Spain. However, he admitted to a doctor friend that he had always yearned to go into medicine. â€œI explained how I had found it enormously rewarding to treat people but felt I had gone too far down an alternative career path to be considered for training,â€ the 34-year-old said.

The doctor encouraged Jaimie not to give up on his ambition and, having discovered the Foundation Year in Medicine programme on the internet, he applied to the course. Jaimie is now well on the way to become a doctor. â€œI really enjoyed the social interaction and people-management side of officer life in the army,â€ he said. â€œThe problem was it took me away from medical practice which I really missed. Being a doctor will satisfy both of those interests.â€