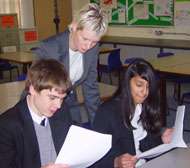 Kingston University played the diplomatic host to a United Nations conference with a difference last month. Around 100 pupils from 12 Hounslow schools descended on the university to debate the major issues affecting Africa.

The return of the Benin Bronzes, compensation for the slave trade and the sale of HIV drugs to the developing world were all on the agenda for the Year 9 and 10 delegates. The youngsters were assigned a country to represent and a topic to research while the universityâ€™s politics students chaired the debates.

The conference was arranged by politics field leader Terry Sullivan in conjunction with Hounslowâ€™s Excellence in Cities programme. â€œModelling an event around the way the UN works is a fun and informative way of getting pupils to learn about issues affecting Africa and the third world,â€ Mr Sullivan said.

Sarah Zaheer, a Year 9 pupil at Heston Community School, one of the participating schools, explained how the conference had acted as a confidence booster for her peers. â€œI was quite nervous at first but as the day went on I really began to enjoy speaking up,â€ she said. Fellow Heston pupil, Andrew Hyams, said the experience has encouraged him to aim for a place at university. â€œTalking to Kingstonâ€™s staff and students and seeing the universityâ€™s facilities at first hand was a great taster,â€ he added.