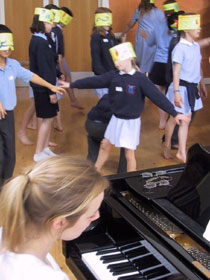 Local school children have been brushing up on their artwork and strutting their stuff in an educational project run by Kingston Universityâ€™s Stanley Picker Gallery. More than 90 pupils from Latchmere Junior School, St Lukeâ€™s Primary School and St Johnâ€™s Primary School starred in the Faustâ€™s Fugue initiative, backed by the universityâ€™s widening participation unit. The six-month project drew on the legend of German astrologer Dr Faustus, who sold his soul to the Devil in exchange for knowledge and power, to show the nine and ten year olds how art and drama can be integrated.

Faustâ€™s Fugue was the brainchild of Kingston fine art graduate Chloe Leaper who approached the galleryâ€™s Deputy Curator Jackie Thomas about developing the idea with local schools. Chloe, a singer and a pianist, invited pupils from participating schools back to the gallery to take part in a series of creative workshops. â€œDepending on whether the music was tranquil or violent, the pupils sketched out their vision of angels or devils,â€ Ms Thomas said. "They also made eyeless masks and, without being able to see what their classmates were doing, translated the mood of the music into dance.â€

The pupils saw the results of their endeavours when their drawings were incorporated into the backdrop of Chloeâ€™s soprano performance at the Picker Gallery in October. The music on the accompanying tape recording, composed by fellow Kingston graduate Richard Evans, also included speech and sound the pupils had recorded with Chloe. St Lukeâ€™s Art Co-ordinator Susan Horwood said the children had enjoyed working so closely with professional artists. "The gallery is a brilliant resource and it was a unique learning experience for them,â€ she said.