Landmark building to act as catalyst for change at University

Landmark building to act as catalyst for change at University 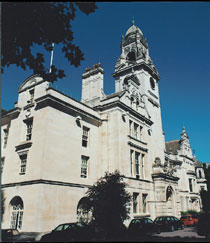 Kingston Universityâ€™s Board of Governors has given the stamp of approval to a project that could fundamentally reshape the way the University looks and operates. At a meeting held earlier this month, the Governors agreed the business plan for the New University Project. The cornerstone of this venture is the proposed purchase and conversion of County Hall, currently home to Surrey County Council.

Plans to occupy County Hall became a key element of the Universityâ€™s Estates Strategy in July after the County Council confirmed it would be putting the site up for sale. Since then, considerable work has been undertaken to assess possible purchase options. An outline price has been agreed with the County Councilâ€™s agent, Equion, although a significant amount of work still needs to be completed before a final agreement can be reached.

Surrey County Council Chief Executive Paul Coen said it would be difficult to think of a more appropriate use of such a prestigious building. â€œWe welcome the Kingston University bid to purchase County Hall which has arisen as part of our proposals to transform Surrey County Council into a flexible, modern council,â€ he said. Mr Coen stressed that negotiations were ongoing since the University proposal was subject to the Council receiving planning permission for its preferred site in Woking.

The Universityâ€™s Pro Vice-Chancellor for Estates, Professor Reg Davis, said that property consultants had confirmed the University had outgrown its current facilities and, without County Hall, would be unable to expand to meet its educational objectives. J M Consulting had been analysing the Universityâ€™s property in the light of its predicted development, he explained. "The consultants told us that acquiring County Hall would not only give the University much more of a presence in Kingston, it could be key to our future competitiveness,â€ Professor Davis said. They had concluded that if the University was to remain in its present buildings, it could expect to pay Â£40 million in upkeep during the next 10 years just to accommodate the current rate of student growth, he said.

The Leader of Kingston Borough Council, Counsellor Derek Osbourne, said it would be particularly fitting for the University to move into County Hall. â€œIt is one of the townâ€™s key cultural and economic drivers, so it makes sense for it to occupy a landmark building in the very heart of Kingston,â€ he said.

Pro Vice-Chancellor for Strategic Development Dr Ken Hopkins will co-ordinate the New University Project and believes the County Hall site has enormous potential. â€œAs well as being a superb location in which to work and study, the complex will make a significant impact on Kingstonâ€™s academic and physical development,â€ Dr Hopkins said. â€œIt will provide an opportunity to review the present structure and stimulate new ways of working to help keep Kingston at the forefront of 21st century higher education.â€

It is expected that staff and students will move into the County Hall complex in 2007 if the University is successful in its purchase bid.