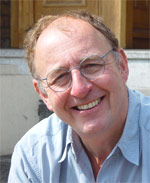 School pupils will be among the first to enjoy performances at the new Kingston theatre, thanks to backing from the University. Primary and secondary school children from around the region will be attending the matinee performance of Henry V on March 20. The performance is part of the Spring Season initiative where audiences of up to 1,000 will get a sneak preview of the theatre shell ahead of its completion in spring next year.

The University's drama field leader Frank Whately, who is also a director of the Kingston Theatre Trust, believes the youngsters will play an important part in the theatre's long-term success. "The facilities will still be quite basic but we want the pupils to get a feel for the theatre and recognise it as somewhere they can go," Frank said. "They are the future of the theatre and we want them to come back time and time again."

Henry V, produced by the Halifax-based Northern Broadsides company, is one of three plays that will be on show during the inaugural spring season. The curtain will also go up on Thomas Heywood's A Woman Killed by Kindness and community play Don Juan in Kingston.

"I'm sure the actors will play to packed houses throughout the spring season and it will be great to see Kingston schoolchildren being part of the first stage of this exciting venture," Frank said. "The theatre will be an asset for students, residents and visitors and, most importantly, will give the town a cultural heart." The University has donated Â£3,000 to this venture, in addition to the Â£250,000 it gave to the trust to begin fitting out the playhouse. "We are committed to young people and their cultural development," Frank said. "Our involvement with the theatre confirms that."