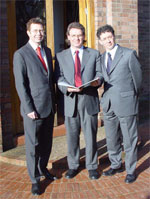 Small businesses in Britain must improve their performance if they are to keep pace with Europe, research just released by Kingston University has revealed.

The European Small Business Survey, sponsored by Lloyds TSB, looked at 800 firms in the United Kingdom, France and Germany. Results, released last month, show the United Kingdom's small to medium-sized businesses rely too much on markets located within a five-mile radius of their bases. They also have fewer customers, suppliers and competitors and are less likely to use web technology or e-commerce.

The survey's author, Professor Mark Hart from the University's Small Business Research Centre, said the findings highlighted the number of challenges faced by British companies if they were to compete with firms in mainland Europe. "Businesses should concentrate on profitability," he said.
"But they would also be well advised to follow their French and German counterparts in improving staff qualifications, increasing exports and making better use of technology."

Parliamentary Under-Secretary for Small Business and Export Control Nigel Griffiths said the report would have an impact on Government policy-making on small firms. "It will inform the Government about how it can review its approach to business and ensure that resources are targeted in the most appropriate areas," he said.

Director of the University's Small Business Research Centre, Professor Robert Blackburn, said the survey was an important piece of international research. "It demonstrates the quality of the work conducted by the Research Centre and illustrates our close links with the business community and policy makers," he said.