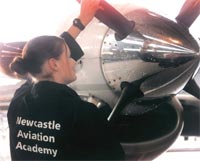 The Academy is the result of an innovative partnership between the University, Newcastle Airport, the City of Bristol College and Newcastle College. As a key player, Kingston's School of Engineering has been awarded Â£1.7 million by the One North East Regional Development Agency to refurbish a hangar at Newcastle Airport and buy Boeing 737 and Hawker Siddeley aircraft. Prime Minister Tony Blair has been invited to open the Academy in the summer.

The establishment of the Academy is another important milestone in the School of Engineering's mission to become the leading provider of Aviation education and training in Europe. Kingston's Foundation Degree in Aircraft Engineering was launched in 2001. Run in partnership with KLM Engineering Limited and the City of Bristol College, it currently has 250 students on its books. It is the first programme to offer students in the United Kingdom the chance to gain a JAR-66 licence, enabling graduates to take up positions as aircraft engineers without further on-the-job training. Late last year Kingston was named as a European Centre of Excellence for Aviation education and training and this is being extended to the Newcastle Airport Academy campus.

The University's Pro Vice-Chancellor for Enterprise, Professor Andrew Self, said the new Academy would help counter a worldwide shortage of aircraft maintenance engineers. "It will have a tremendous impact on the industry," he said. "Within five years, Kingston Foundation Degree graduates will be signing off the majority of aircraft in the United Kingdom as safe for flight."

Newcastle Airport Chief Executive John Parkin said demand for air travel was expected to rise rapidly during the next 30 years. "To keep pace, we need to develop and diversify the knowledge and skills' base to support the expansion of air services. With the help of Kingston University, the Newcastle Aviation Academy will build a world-class aviation engineering workforce," he said.

The University's Foundation Degree in Aircraft Engineering has earned significant praise during the past year. Higher Education Minister Margaret Hodge has cited it in several speeches as a shining example of the way in which education and industry should work together to address skills' gaps.

Kingston has a number of other plans for course expansion. Professor Self is finalising arrangements to open an aviation academy in Sri Lanka and intends to step up training provision in other parts of the United Kingdom. The University has also been awarded a Â£0.9 million Higher Education Funding Council grant to develop a laboratory at its Roehampton Vale campus and has purchased a Learjet for practical training.

Related link: Read here the article from the Independent about the Foundation Degree (23/01/2003)