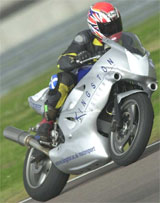 A team of motorcyclists from Kingston University has been setting the pace on some of the country's top race tracks. The students, who competed at Brands Hatch and Snetterton last summer, are now fine-tuning their Triumph TT600 bike to ensure peak performance when they line up against more of Britain's best young motorcyclists this year.

Team technician Paul Adams believes Kingston's motorcycling contingent has the perfect skill level to make its name at the national championships. "We've been continuing to develop and test our bike during the past couple of months so that it performs as precisely as possible," he said. The 30 year old from Morden came to Kingston to study motorcycle engineering because it was the only institution in the country offering such a course. "Having the opportunity to actually race with the University team has been a great experience and one I wouldn't have had anywhere else," Paul said.

The four motorcycling enthusiasts, who meet up regularly outside the lecture theatre, can't wait to get back on the road after the winter break. One of the riders, Mike Dawson, has even managed to steer his way into a top job with motorcycle dealer Ducati after graduating last year. "I've only ever wanted to work in this industry and it's so exciting to be putting into practice what I learned on my course and on the track," he said.

Course tutor Paul Brandon is optimistic about the team's future. "What we have achieved in such a short time shows how far we have progressed," he said. "We are now perfectly poised to take on challengers at a national level."