Harley fashions up a high-flying career

Harley fashions up a high-flying career

A Kingston Fashion graduate is rubbing shoulders with some of the biggest names in the industry after being signed up as a menswear designer at Yves St Laurent. Harley Hughes, who left the University in 1994, joined the clothing giant nine months ago after four years working for Belgian designer Martin Margiela.

Ironically, Harley once wondered whether he would ever make the big time. "It took a lot of persistence to find the job I wanted and I was asking myself if I was really doing the right thing," he said. A position as a menswear assistant with the John Richmond label soon set him on the right track. Before long, he had been signed up by Margiela and got the chance to fulfil his dream of working in the fashion capital, Paris.

It was during his time at Margiela that London-born Harley was headhunted by Yves St Laurent. "Margiela's designs were getting a lot of attention and I think that's why YSL contacted me. It's been an incredible chain of events, but it just goes to show you never know what's around the corner," Harley said. "I love working for YSL, dealing with major clients. This is what I have been aiming towards ever since I graduated."

Harley credits the course at Kingston for preparing him for the challenges of the fiercely- competitive world of fashion. "I learned so much from my time at the University," he said. "The Fashion Degree programme taught me the realities of the industry and my tutors made sure I got a really thorough training."

Head of Fashion John McKitterick said Harley's rise to prominence was another example of the strengths of the course. "His success is a direct reflection of the fact that Kingston's Fashion School places great emphasis on teaching the subject in a way that nourishes the students both creatively and intellectually," John said. 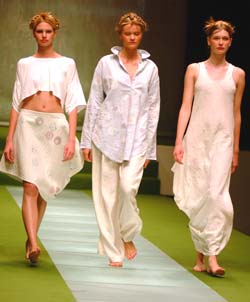 Kingston Fashion graduates are causing a stir all over the globe. At the Mittelmoda International Fashion Competition in Italy, Claire Cross, who finished her Degree last year, saw off more than 30 other entrants to win the Masters of Linen Award with her pyjama-inspired collection pictured above.

Camilla Taylor, another student fresh out of the Fashion School, scooped the Vesti di Cotone Award with her menswear collection based on the theme 'Getting Up in the Morning'.

Claire now works for the Dewhirst Group in London while Camilla is employed as a junior designer at Griffin Studios in Wiltshire.