Talar makes it into the top ten

Talar makes it into the top ten

A Kingston University student's account of her exchange experiences in Europe has earned national recognition. Talar Ozkaya was one of 10 finalists shortlisted for the UK Erasmus Student Prize after putting pen to paper to describe a two-term stint studying in the French city of Rouen. 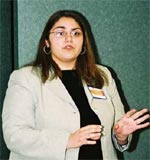 The 21 year old, in the final year of a business and languages degree at the university, signed up for the Erasmus programme which gives participants the chance to spend up to a year studying in Europe, determined to improve her knowledge of French language and culture. "I saw it as a once in a lifetime opportunity," Talar said. "It was my first time away from home though which made it a little scary since I had no idea how well I would cope."

She need not have worried. Talar returned to the United Kingdom after seven months at the Ã‰cole de Commerce de Rouen fluent in French and armed with a much better insight into the country's business systems and culture. She originally chose her course at Kingston's Business School because of its reputation for strong international links.

"I've always wanted to work in Europe and being able to take part in the Erasmus programme was an added benefit of being at the university," Talar said. Being shortlisted for the UK Erasmus Student Prize, organised to mark the fact that 1,000,000 students have now completed the European Union-funded scheme, came as an unexpected bonus. The judges tested Talar's written and presentation skills and she certainly didn't find herself stuck for words. "It wasn't hard to put my case because I'm so enthusiastic about the scheme after getting so much out of it," she said. "The confidence my Erasmus exchange has given me means I will be in an excellent position to achieve my goals when I graduate."