Rebecca seeks out the stars

Rebecca seeks out the stars 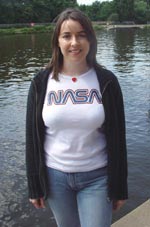 A Kingston University graduate is on an academic mission to discover if there is life on other planets. Earth and planetary science specialist Rebecca Blackhurst is finishing a postgraduate quest for signs of water and primitive life on Mars. Her goal at the end of her trek through the academic world is to land a research job at Americaâ€™s National Aeronautics and Space Administration (NASA).

The 30 year old has already worked with meteorite expert Dr Monica Grady from the Natural History Museum. Their study of bugs in rocks from the Antarcticâ€™s dry valleys – the closest earth equivalent of the hostile Martian surface – led to a surprising revelation. They discovered that elements such as iron became depleted in rocks that contained microbes. The jury is still out on the reasons why but they could have a bearing on whether life has ever existed on the Red Planet.

Rebeccaâ€™s presentation of her joint research has already brought her to NASAâ€™s attention, clinching her an award for excellence in astrobiology.
Rebecca came to Kingston University as a mature student armed with plenty of down-to-earth experience of life, ranging from working as a financial analyst in London to travelling around the world.

It was on a trip to the South Island in New Zealand that, inspired by the beauty of the landscape, she decided to study geology. â€œI wanted to understand the geology of this planet before even beginning to find out how the rest of the universe works,â€ she said. â€œI also had to make a leap from doing advanced levels in the arts at school 10 years before to studying for a degree in a science subject.â€

Rebecca hopes her example will encourage more people to change the course of their lives and opt for higher education. â€œSometimes it takes a little star-gazing as well as hard work,â€ she said.