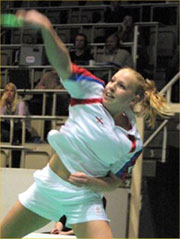 A Kingston University sports science graduate has shot to the top of badmintonâ€™s world rankings. Gail Emms currently shares the number one spot with her mixed doubles partner, Nathan Robertson.

The 25 year old, who graduated from Kingston in 1998, picked up gold in last yearâ€™s Commonwealth Gamesâ€™ mixed team badminton event, which consisted of one mixed doubles and two singles ties. She added a bronze to her medal haul for her performance in the womenâ€™s doubles, where she teamed up with Jo Goode.

Gail is now looking forward to next yearâ€™s Olympic Games in Athens and has her sights on another medal in the mixed doubles event. â€œNathan and I think weâ€™ve got a very good chance. If we keep performing as we have been and strive to improve further thereâ€™s no reason why we canâ€™t do well. My dream is to win an Olympic gold,â€ she said.

University Director of Sport James Hayter said Gail was a shining example to Kingstonâ€™s other up-and-coming athletes. â€œItâ€™s fantastic to see her go on to bigger and better things. She is a great professional and thoroughly deserves everything she has achieved,â€ he said.