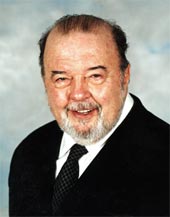 Kingston University is preparing to give aspiring actors the chance to train with one of Britainâ€™s most distinguished directors in a brand new civic theatre. A two-year postgraduate course in classical acting will be created for the University by its Chancellor, Sir Peter Hall, who is this year celebrating 50 years as a director. The course will be closely linked to the new Kingston Theatre where Sir Peter will be the first Artistic Director, heading a company of 15 actors.

Planned to start in autumn 2004, the course will cater for up to 20 young actors, designers and directors. They will be taught by Sir Peter, actors and directors from the theatre company and staff from the Drama Department. The first year will encompass training in classical acting. In their second year, students will rehearse and perform with Kingston Theatreâ€™s ensemble company, giving them the chance to work with professionals of international renown.

The Dean of the Faculty of Arts and Social Sciences, Professor Gail Cunningham, said the course would be unrivalled in the United Kingdom. â€œStudents enrolled on this course will have a unique opportunity to grasp the ideas and insights of an eminent director whose contribution to British theatre cannot be over-estimated,â€ she said. â€œTheir understanding of theatre and its impact on culture will be enhanced significantly and their talents will be tested and refined through working with professional actors.â€

Sir Peter Hallâ€™s internationally-acclaimed career has included many highlights. He created the Royal Shakespeare Company in 1960 and, in 1973, became Director of the National Theatre. From 1984 to
1990, Sir Peter was Artistic Director of Glyndebourne Festival Opera. He has directed more than 200 productions and produced countless others during the past 50 years.

Sir Peter has taught and lectured extensively at universities both in the United Kingdom and the United States. He said he was delighted to have another opportunity to pass his experience on to young actors. â€œSetting up the postgraduate course is a fulfilment of one of my long-held ambitions, made possible by the links between this wonderful new theatre and Kingston University. After 50 years of directing, I would like to try to share what I have learned. I am aware that the only way to remain creative is to understand and listen to the young. It is wonderful that the staff at Kingston University share my vision and will be working closely with me to bring it to life.â€

Kingston Theatre, which is scheduled to open in autumn 2004, is inspired by the Elizabethan Rose where some of Shakespeareâ€™s first plays were performed. As well as the main auditorium, the venue has a studio theatre, a space for experimental work and an art gallery. It has been described by Sir Peter as one of the best theatre spaces he has ever seen.

Robin Hutchinson from the Kingston Theatre Trust said the venue was set to become a cultural focus not only for the local area but also nationally and internationally. â€œOur dream of bringing the very best to Kingston and providing the training ground for the next generation of great performers, writers, designers and directors is about to become a reality,â€ he added.