Kingston University is launching a new music degree that could change the tune and career path of budding Beethovens.

The Master in Composing for New Media starting in September focuses on the skills needed to produce music and audio art for digital media. 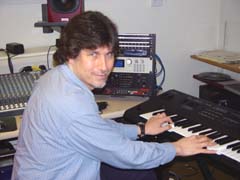 Students will be taught how to develop music for websites, computer games and software packages.

The programme has been introduced by the School of Music's new creative technology leader Howard Fredrics.

He has composed music for computer giants Nintendo and for the ABC television network in his native America.

The course was vital to meet the demands of the modern music industry, Mr Fredrics said.

"The direction that the music industry has followed during the past decade has changed the way composers work," he said.

"Musicians today are becoming increasingly involved with other media and courses have to respond to that."

"Kingston University has the benefit of having major multimedia companies on its doorstep," he said.

"Our students will have the opportunity to collaborate with these experts to produce professional work."

Students will also master the art of designing sound for theatre, film and television.

"Music is used in all types of contexts," Mr Fredrics said.

"There are a tremendous number of exciting opportunities out there for students who successfully complete this course."